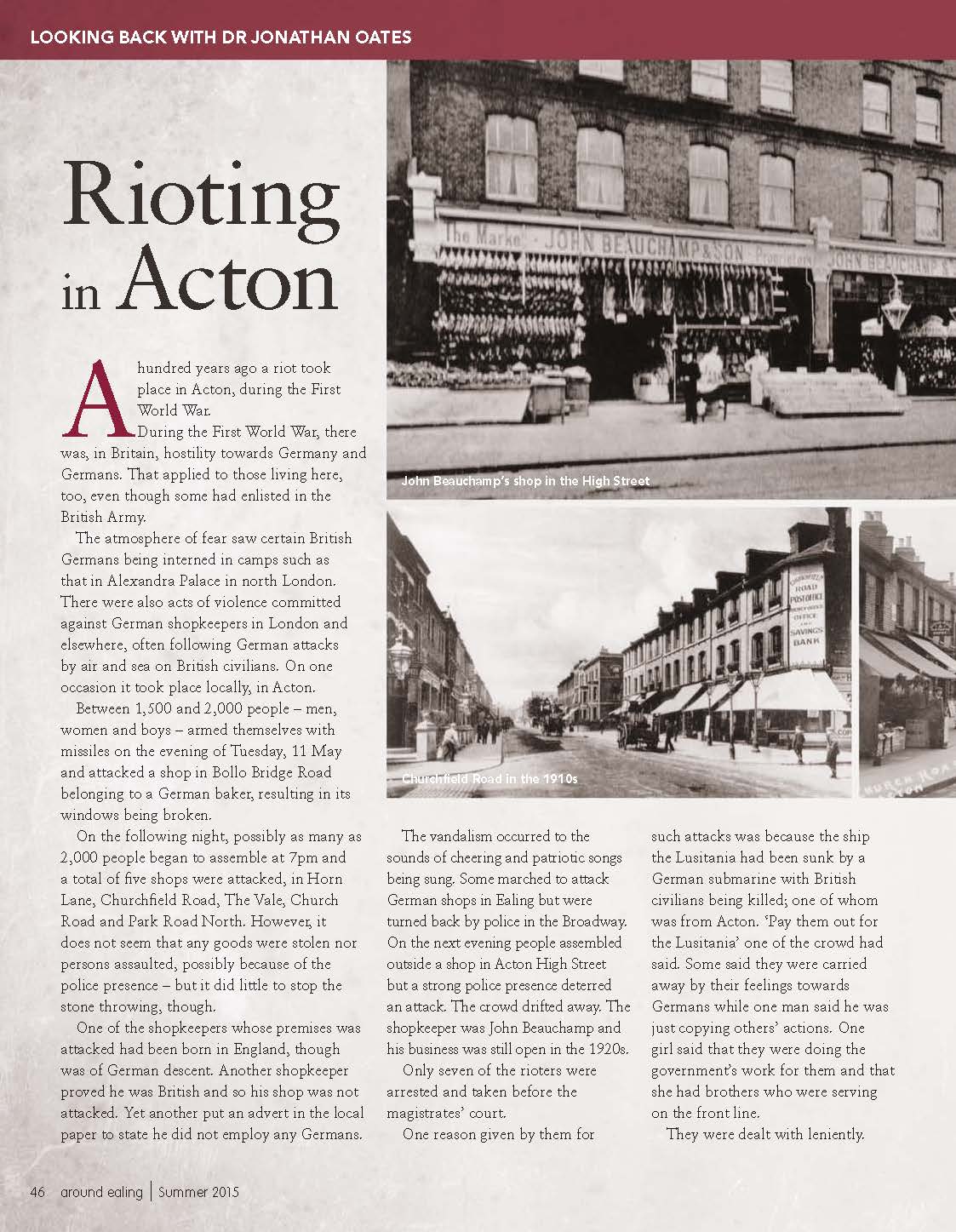 A hundred years ago a riot took place in Acton, during the First World War.

During the First World War, there was, in Britain, hostility towards Germany and Germans. That applied to those living here, too, even though some had enlisted in the British Army.

The atmosphere of fear saw certain British Germans being interned in camps such as that in Alexandra Palace in north London.

There were also acts of violence committed against German shopkeepers in London and elsewhere, often following German attacks by air and sea on British civilians. On one occasion it took place locally, in Acton.

Between 1,500 and 2,000 people – men, women and boys – armed themselves with missiles on the evening of Tuesday, 11 May and attacked a shop in Bollo Bridge Road belonging to a German baker, resulting in its windows being broken.

On the following night, possibly as many as 2,000 people began to assemble at 7pm and a total of five shops were attacked, in Horn Lane, Churchfield Road, The Vale, Church Road and Park Road North. However, it does not seem that any goods were stolen nor persons assaulted, possibly because of the police presence – but it did little to stop the stone throwing, though.

One of the shopkeepers whose premises was attacked had been born in England, though was of German descent. Another shopkeeper proved he was British and so his shop was not attacked. Yet another put an advert in the local paper to state he did not employ any Germans.

The vandalism occurred to the sounds of cheering and patriotic songs being sung. Some marched to attack German shops in Ealing but were turned back by police in the Broadway.

On the next evening people assembled outside a shop in Acton High Street but a strong police presence deterred an attack. The crowd drifted away. The shopkeeper was John Beauchamp and his business was still open in the 1920s.

Only seven of the rioters were arrested and taken before the magistrates’ court.

One reason given by them for such attacks was because the ship the Lusitania had been sunk by a German submarine with British civilians being killed; one of whomwas from Acton. ‘Pay them out for the Lusitania’ one of the crowd had said. Some said they were carried away by their feelings towards Germans while one man said he was just copying others’ actions. One girl said that they were doing the government’s work for them and that she had brothers who were serving on the front line.

They were dealt with leniently. Some had to pay small fines. The local press remarked that young men who wanted to show their patriotism should enlist in the armed forces rather than throwing stones in complete safety.

By 1921 there were 94 Germans resident in Acton – but none of those whose shops were attacked in 1915 were then listed as being in business.

This originally appeared in Around Ealing summer 2015