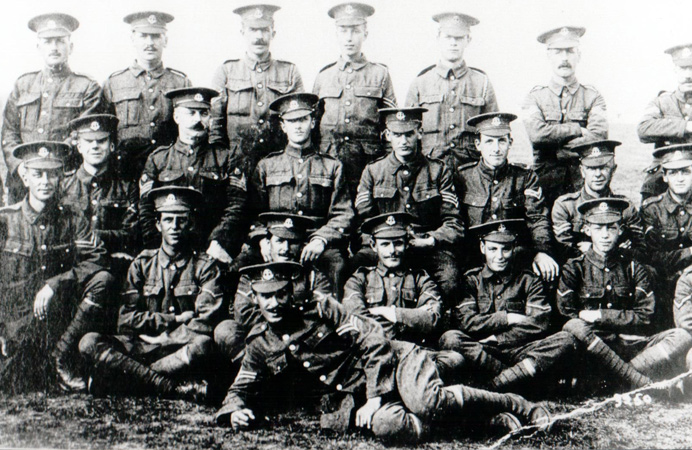 Tens of thousands of local men served in the armed forces in the First World War. At least three of them were decorated for extreme valour in face of the enemy and were awarded the Victoria Cross, writes Dr Jonathan Oates.

The first two were Lieutenant Allastair McReady-Diarmid and Captain Frank Roberts. McReady-Diarmid (born in London in 1888) was later in Acton, living in a house in Goldsmith’s Avenue. He enlisted into the 17th battalion of the Middlesex Regiment in 1915. On 30 November 1917 at Moeuvres, France, as acting captain, he led his company through a barrage of enemy fire and this drove back the Germans. His men captured 17 Germans. On the next day there was another German attack. The lieutenant called for volunteers and charged at the head of his men. He threw grenades towards the Germans so that his men could advance with less risk and they recovered the grounds that the German advance had taken. However, in doing so he was killed by a German grenade. It was said ‘His heroism is the talk of the Brigade’. His Victoria Cross was posthumous.

Roberts, born in 1891, was a son of the Rev. Frank Roberts, Vicar of St. John’s church, Southall. Unlike McReady-Diarmid he was a professional soldier in the 1st battalion of the Worcestershire Regiment who had been commissioned in 1911. With the outbreak of war in 1914 he served on the Western Front, being involved in the battles of Neuve Chapelle in 1915 and Paschendale in 1917. He won the DSO in 1915 and the Military Cross in 1917 and was promoted throughout these years.

In March 1918, when the German army was making its last offensive, his battalion was at Pargny, just west of the Somme. At this time Roberts was acting lieutenant colonel, one of the youngest men to hold such a rank. Due to weight of numbers, the battalion was forced to retreat, but not only did Roberts ensure that it was orderly, but that they were able to make a counter attack, thus helping other battalions to withdraw safely. For his ‘conspicuous bravery’ and ‘exceptional military skill’, he was awarded the Victoria Cross. Despite being wounded, he returned to lead the battalion in June 1918 and saw active service from then to the war’s end.

In later life he became a staff officer and served in Egypt, Germany, Iraq and India. Promoted to the rank of Major General in 1939 he resigned at the year’s end. He died in 1982.

The third to be given a Victoria Cross was Robert Spall of Acton. You can read his story here, which we published in August to commemorate a paving stone being laid in his honour in the street he used to live – Spencer Road.

Spall’s citation from ‘The London Gazette, October 1918’ reads: ‘For most conspicuous bravery and self-sacrifice when, during an enemy counter-attack, his platoon was isolated. Thereupon Serjt. Spall took a Lewis gun and, standing on the parapet, fired upon the advancing enemy, inflicting very severe casualties. He then came down the trench directing the men into a sap seventy-five yards from the enemy. Picking up another Lewis gun, this gallant N.C.O. again climbed the parapet, and by his fire held up the enemy. It was while holding up the enemy at this point that he was killed. Serjt. Spall deliberately gave his life in order to extricate his platoon from a most difficult situation, and it was owing to his bravery that the platoon was saved.’

Many men who were too old or were otherwise unable to serve in the armed forces because of health reasons or having ‘reserved’ occupations, joined the Special Constabulary in their district. Many police officers had joined the army and with additional concerns to be dealt with, such as fears of spies, saboteurs, enemy aliens and air raids, more officers were needed of the duration of the war. This is what the Special Constabulary were formed for.

There are many more stories on the First World War, and on local heroes who fought in the conflict, on this website. Type ‘First World War’ in the search box at the top of the page. And, of course, keep an eye out for the last of the current series of stories to be published, on 1 November.