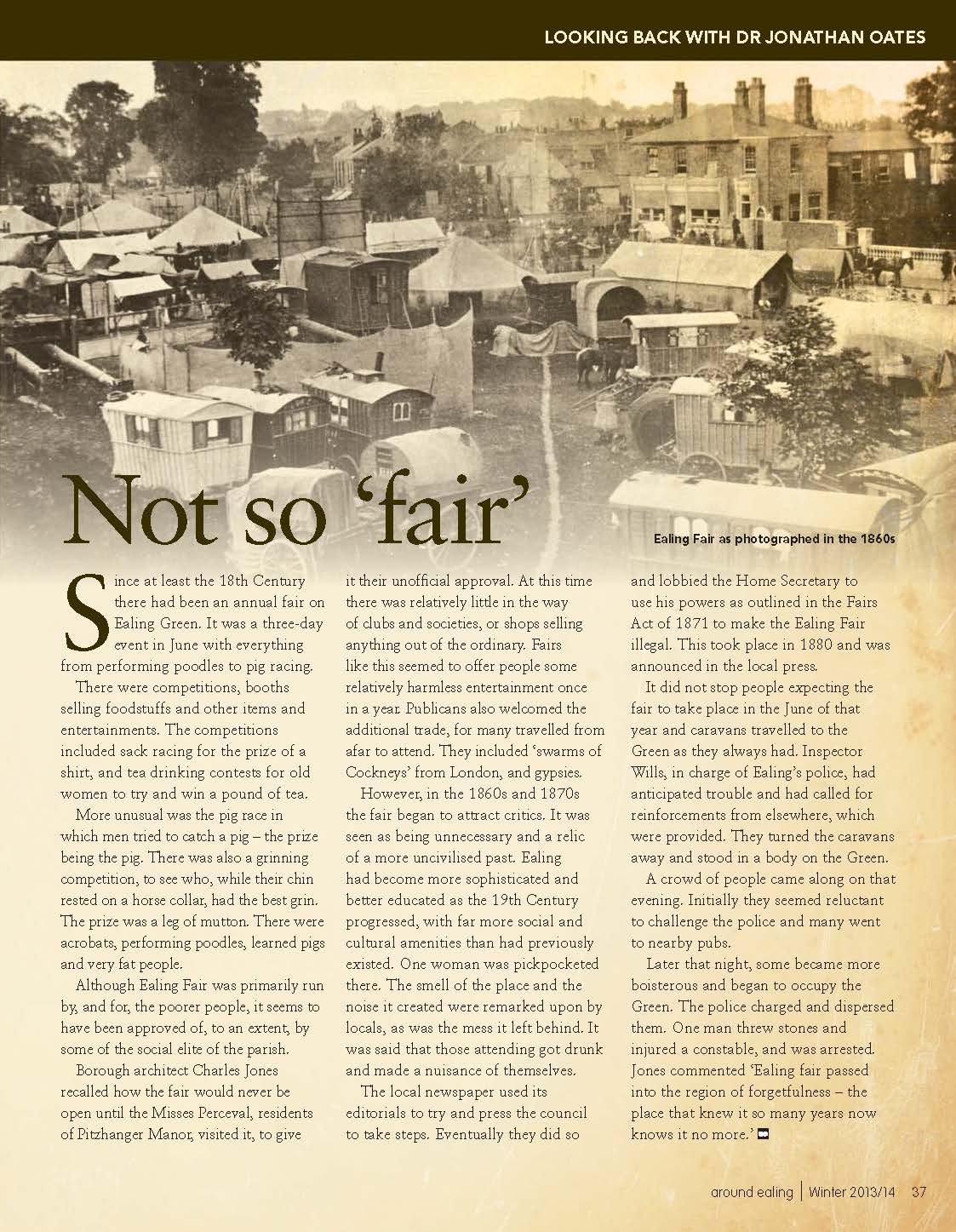 Since at least the 18th Century there had been an annual fair on Ealing Green. It was a three-day event in June with everything from performing poodles to pig racing.

There were competitions, booths selling foodstuffs and other items and entertainments. The competitions included sack racing for the prize of a shirt, and tea drinking contests for old women to try and win a pound of tea.

More unusual was the pig race in which men tried to catch a pig – the prize being the pig. There was also a grinning competition, to see who, while their chin rested on a horse collar, had the best grin.

The prize was a leg of mutton. There were acrobats, performing poodles, learned pigs and very fat people.

Although Ealing Fair was primarily run by, and for, the poorer people, it seems to have been approved of, to an extent, by some of the social elite of the parish.

Borough architect Charles Jones recalled how the fair would never be open until the Misses Perceval, residents of Pitzhanger Manor, visited it, to give it their unofficial approval. At this time there was relatively little in the way of clubs and societies, or shops selling anything out of the ordinary. Fairs like this seemed to offer people some relatively harmless entertainment once in a year. Publicans also welcomed the additional trade, for many travelled from afar to attend. They included ‘swarms of Cockneys’ from London, and gypsies.

However, in the 1860s and 1870s the fair began to attract critics. It was seen as being unnecessary and a relic of a more uncivilised past. Ealing had become more sophisticated and better educated as the 19th Century progressed, with far more social and cultural amenities than had previously existed. One woman was pickpocketed there. The smell of the place and the noise it created were remarked upon by locals, as was the mess it left behind. It was said that those attending got drunk and made a nuisance of themselves.

The local newspaper used its editorials to try and press the council to take steps. Eventually it did so and lobbied the Home Secretary to use his powers as outlined in the Fairs Act of 1871 to make the Ealing Fair illegal. This took place in 1880 and was announced in the local press.

It did not stop people expecting the fair to take place in the June of that year and caravans travelled to the Green as they always had. Inspector Wills, in charge of Ealing’s police, had anticipated trouble and had called for reinforcements from elsewhere, which were provided. They turned the caravans away and stood in a body on the Green.

A crowd of people came along on that evening. Initially they seemed reluctant to challenge the police and many went to nearby pubs.

Later that night, some became more boisterous and began to occupy the Green. The police charged and dispersed them. One man threw stones and injured a constable, and was arrested.

Jones commented ‘Ealing fair passed into the region of forgetfulness – the place that knew it so many years now knows it no more.’

Originally appeared in Around Ealing winter 2013/14