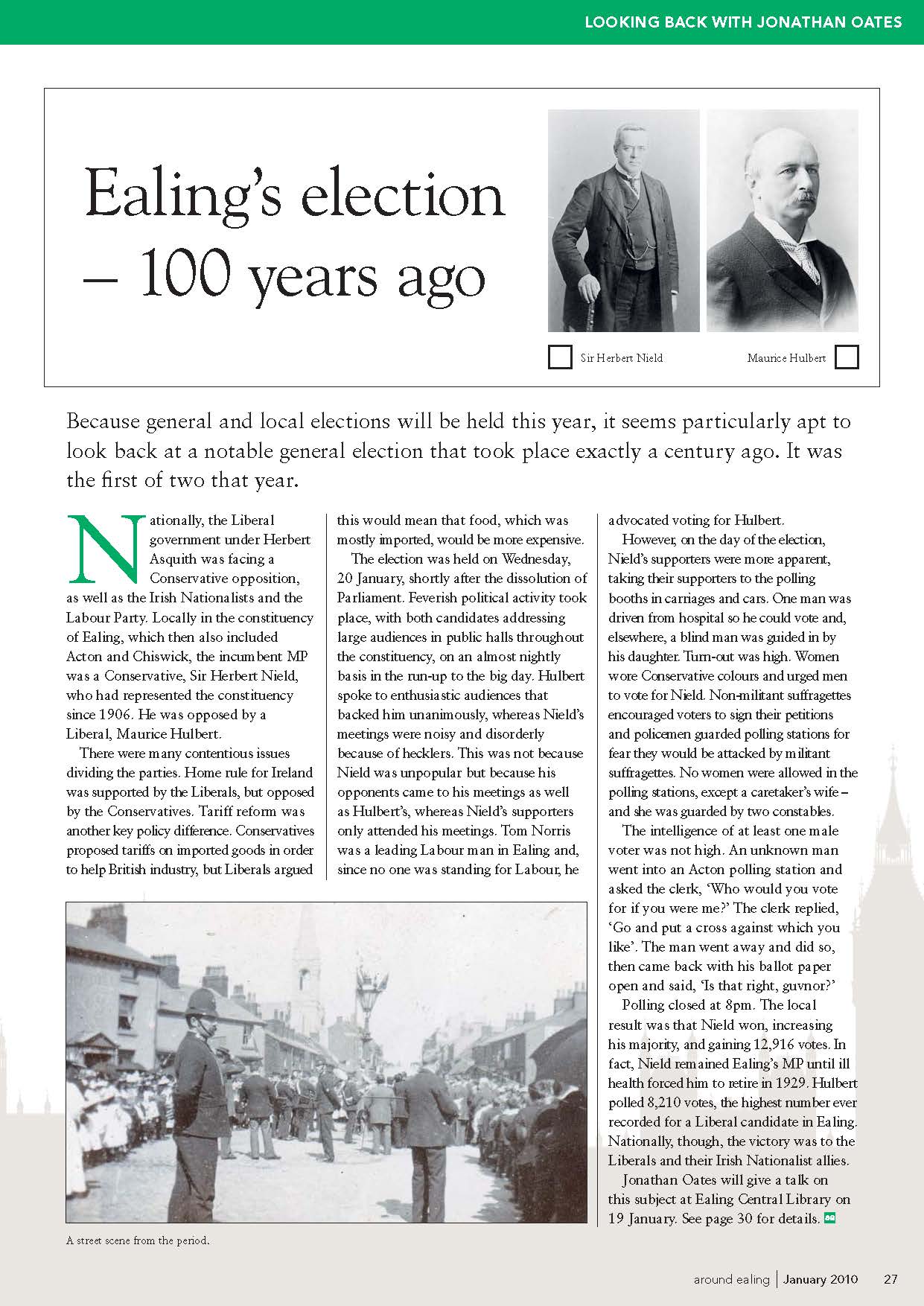 Because general and local elections will be held this year, it seems particularly apt to look back at a notable general election that took place exactly a century ago. It was the first of two that year.

Nationally, the Liberal government under Herbert Asquith was facing a Conservative opposition, as well as the Irish Nationalists and the Labour Party. Locally in the constituency of Ealing, which then also included Acton and Chiswick, the incumbent MP was a Conservative, Sir Herbert Nield, who had represented the constituency since 1906. He was opposed by a Liberal, Maurice Hulbert.

There were many contentious issues dividing the parties. Home rule for Ireland was supported by the Liberals, but opposed by the Conservatives. Tariff reform was another key policy difference. Conservatives proposed tariffs on imported goods in order to help British industry, but Liberals argued this would mean that food, which was mostly imported, would be more expensive.

The election was held on Wednesday, 20 January, shortly after the dissolution of Parliament. Feverish political activity took place, with both candidates addressing large audiences in public halls throughout the constituency, on an almost nightly basis in the run-up to the big day. Hulbert spoke to enthusiastic audiences that backed him unanimously, whereas Nield’s meetings were noisy and disorderly because of hecklers. This was not because Nield was unpopular but because his opponents came to his meetings as well as Hulbert’s, whereas Nield’s supporters only attended his meetings. Tom Norris was a leading Labour man in Ealing and, since no one was standing for Labour, he advocated voting for Hulbert.

However, on the day of the election, Nield’s supporters were more apparent, taking their supporters to the polling booths in carriages and cars. One man was driven from hospital so he could vote and, elsewhere, a blind man was guided in by his daughter. Turn-out was high. Women wore Conservative colours and urged men to vote for Nield. Non-militant suffragettes encouraged voters to sign their petitions and policemen guarded polling stations for fear they would be attacked by militant suffragettes. No women were allowed in the polling stations, except a caretaker’s wife – and she was guarded by two constables.

The intelligence of at least one male voter was not high. An unknown man went into an Acton polling station and asked the clerk, ‘Who would you vote for if you were me?’ The clerk replied, ‘Go and put a cross against which you like’. The man went away and did so, then came back with his ballot paper open and said, ‘Is that right, guvnor?’

Polling closed at 8pm. The local result was that Nield won, increasing his majority, and gaining 12,916 votes. In fact, Nield remained Ealing’s MP until ill health forced him to retire in 1929. Hulbert polled 8,210 votes, the highest number ever recorded for a Liberal candidate in Ealing.

Nationally, though, the victory was to the Liberals and their Irish Nationalist allies.

This originally appeared in Around Ealing January 2010