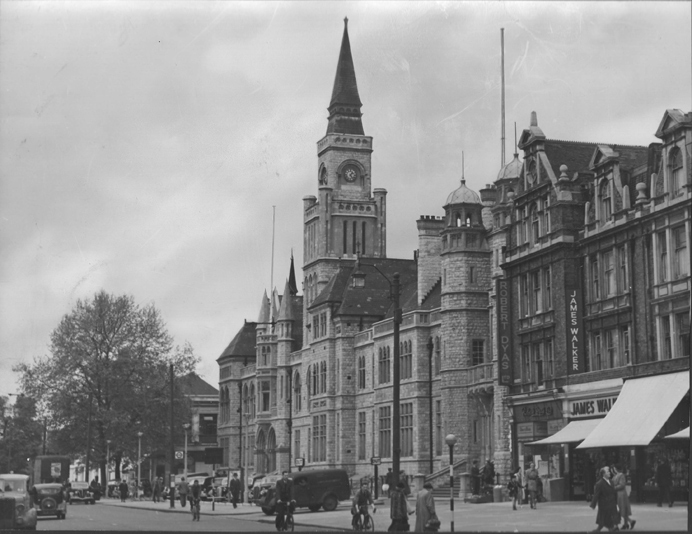 Ealing Town Hall will close next year for refurbishment and reconfiguration. When it reopens, it will continue as the borough’s primary civic building but will also feature a boutique hotel, a bar and more.

The distinctive, late-Victorian, neo-gothic building in Ealing Broadway has stood for almost 130 years and once housed a swimming pool and library.

It was built between 1886 and 1888, and was the physical embodiment of the growing prosperity and population of Ealing, which had only stood on its own for a couple of decades.

Until the 1860s, the town and district of Ealing had been part of the same parish as Brentford and was governed by the parish vestry. The two places separated when the Local Government Act of 1858 allowed districts to apply to become Local Boards and, in 1863, Ealing residents successfully petitioned the government to achieve this new status.

The first meeting of the board was on 25 May, 1863. They appointed two members of staff. One was Charles Jones, who was appointed as surveyor.

More than 20 years later, the task fell to Jones to build a new, more impressive, town hall that could act as a status symbol for the growing borough. It was to replace a smaller building (now used by NatWest) which was also designed by Jones in the previous decade to hold council meetings and house offices.

Jones negotiated the purchase of the land in Uxbridge Road on which the town hall now stands. The owners were the Wood family, Ealing’s major landowners. There had previously been a falling out between the Wood family and the council, and as a conciliatory gesture the Woods sold the land for £500, a fraction of its true value.

Jones designed the town hall and it cost £16,000 to build. It included a public library and swimming baths.  There was also a fire station in the complex behind the building. Jones wrote “people said it was too good – of course, our reply was that ‘Nothing is too good for Ealing.’”

Another feature of the town hall was the Victoria Hall (named to commemorate Queen Victoria’s Golden Jubilee in 1887), which was designed to accommodate the various clubs and societies that existed in Ealing. This hall was paid for by the subscriptions of local people. Chief among these were Baron Rothschild and Sir Edward Montagu-Nelson (after whom the Nelson Room is named), each contributing £500.

Fittingly, the Victoria Hall will remain available for community groups to hire when the restored town hall opens.

Edward, Prince of Wales (later Edward VII) opened the town hall on 15 December 1888. Jones recalled that the occasion was ‘a red letter day for Ealing’.