Home > Ealing and the Diamond Jubilee of 1897 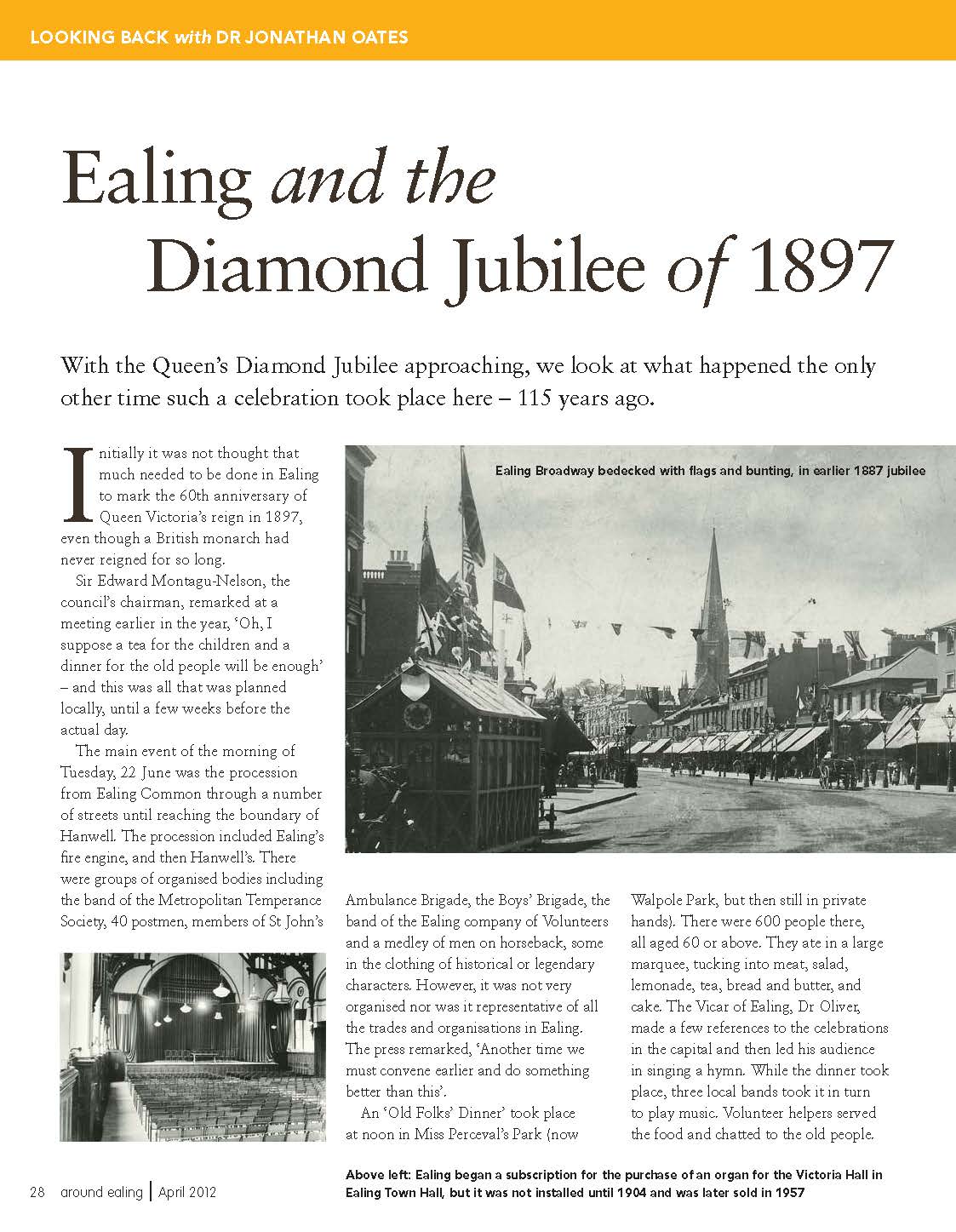 Ealing and the Diamond Jubilee of 1897

With the Queen’s Diamond Jubilee approaching, we look at what happened the only other time such a celebration took place here – 115 years ago.

Initially it was not thought that much needed to be done in Ealing to mark the 60th anniversary of Queen Victoria’s reign in 1897, even though a British monarch had never reigned for so long.

Sir Edward Montagu-Nelson, the council’s chairman, remarked at a meeting earlier in the year, ‘Oh, I suppose a tea for the children and a dinner for the old people will be enough’ – and this was all that was planned locally, until a few weeks before the actual day.

The main event of the morning of Tuesday, 22 June was the procession from Ealing Common through a number of streets until reaching the boundary of Hanwell. The procession included Ealing’s fire engine, and then Hanwell’s. There were groups of organised bodies including the band of the Metropolitan Temperance Society, 40 postmen, members of St John’s Ambulance Brigade, the Boys’ Brigade, the band of the Ealing company of Volunteers and a medley of men on horseback, some in the clothing of historical or legendary characters. However, it was not very organised nor was it representative of all the trades and organisations in Ealing. The press remarked, ‘Another time we must convene earlier and do something better than this’.

An ‘Old Folks’ Dinner’ took place at noon in Miss Perceval’s Park (now Walpole Park, but then still in private hands). There were 600 people there, all aged 60 or above. They ate in a large marquee, tucking into meat, salad, lemonade, tea, bread and butter, and cake. The Vicar of Ealing, Dr Oliver, made a few references to the celebrations in the capital and then led his audience in singing a hymn. While the dinner took place, three local bands took it in turn to play music. Volunteer helpers served the food and chatted to the old people.

The elderly Frederica Perceval herself made an appearance in her wheelchair at the dinner’s end, distributing fl owers and talking to her guests. Finally, all the men present were given tobacco and the women tea. Some stayed for the next part of the celebrations.

The children’s treat commenced on Ealing Common at 2pm. There were about 4,000 children – all those attending elementary or Sunday schools in the district. With the Ealing, Southall and Isleworth town bands playing at their head, the children were marshalled along the Uxbridge Road, to Miss Perceval’s Park. They were singing various songs, such as Victoria our Queen and Rule Britannia.

Some were in the costume of the Elizabethan age. Some boys were dressed as barristers, jesters and policemen. Once at the park they immediately fell upon a feast of bread and butter, tea, cakes and buns, ‘all consumed in quite alarming quantities’. The teachers and helpers then ate, and there were games in which everyone won prizes. Altogether there were about 8,000 people in the park. The events came to an end at just past 8pm.

Streets, however poor, were decorated with flags and bunting. In the evening there were bonfires and lights everywhere and people streamed through the streets. Retired officers mixed with laundry girls and rich and poor shopkeepers fraternised with each other. It was disorganised and chaotic, but goodwill and warm weather created a memorable event.

This originally appeared in Around Ealing April 2012