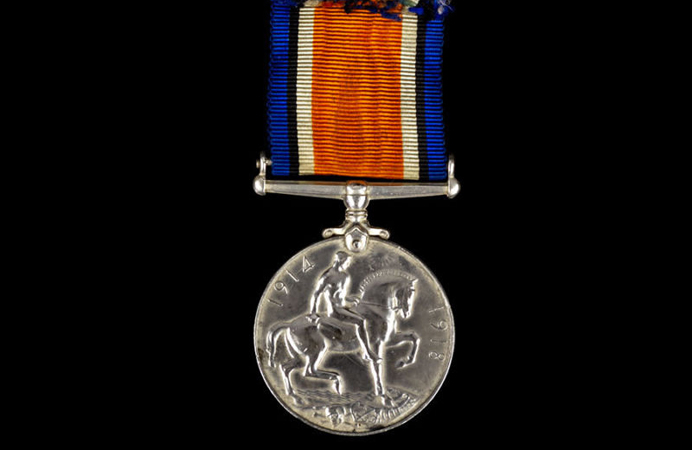 The daughter of a First World War fighter-plane pilot accidentally found her father’s RAF war medal on the internet.

Lieutenant Harold Wilfred Auerbach was from Ealing. He flew as a pilot with the Royal Flying Corps, the precursor of the RAF, between 1917-19; and he was awarded the Campaign War Medal.

His daughter, Patricia Aubrey, happened to be looking on Ebay and saw her father’s war medal for sale by an antique shop owner – Parade Antiques in Plymouth, Devon.

She immediately contacted the owner and bought the medal which she had never seen before. A lady had bought in a bag of old coins and the shop owner recognised that one of the ‘coins’ was actually a war medal. He polished it up and saw ‘Lieutenant H.W. Auerbach – RAF’ inscribed around the edge of the coin and recognised that it was a Campaign War Medal given to an officer who had served in the Royal Flying Corps during the First World War. Not realising for a moment that the officer’s daughter would still be alive, he decided to sell it on the internet.

Patricia contacted the owner and he was shocked to learn that she was the daughter of Lieutenant Auerbach. He was pleased that the medal was to return to the officer’s family – almost exactly 100 years since the pilot had received his RFC Wings on 19 November, 1917.

Harold Wilfred Auerbach was born in Ealing on 27 April 1897 and was baptised at St Peter’s Church. He lived with his family at 1 Carlton Road. He attended Durston House preparatory school and then St Paul’s school. In 1915, having just left school, he wanted to sign-up for the army; and he joined an electrical company of the Royal Engineers later that year.

Having flown aeroplanes already he transferred services on 16 April 1917 and was subsequently sent to the Oxford Royal Flying Corps Training Centre as a cadet, where he honed his flying skills. On 5 July 1917 he was gazetted as a second lieutenant. He was awarded his wings on 19 November 1917 and for the next year served in France and also as part of Britain’s home defences, in a number of different squadrons at numerous airbases.

After the war he was part of the occupying forces in the Rhineland. By now he had gained the rank of lieutenant and was flying one of the new Bristol fighter planes. He was awarded the British War Medal (awarded to all who had served for four weeks or more abroad or had been killed) and presumably also the Victory medal.

His brother Albert, a lieutenant in the first battalion of the London Regiment, was killed in 1918 and is commemorated on the Ealing War Memorial. Demobilised on 25 September 1919, he returned to civilian life and office work.
Harold Auerbach married for the first time in 1926 and as a widower remarried in 1950. He lived in Ealing until his death, as Harold Aubrey, in 1975.