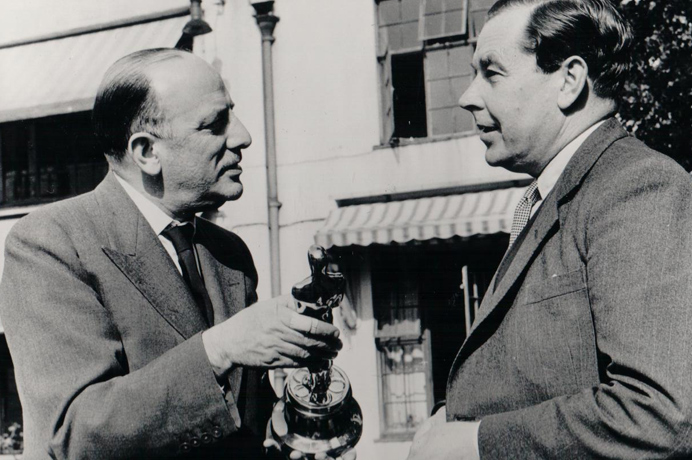 This year marks the 40th anniversary of the death of the man who was the head of production at Ealing Studios during its greatest years in the middle of the 20th Century.

Sir Michael Balcon is pictured above in 1952 presenting an Oscar to screenplay writer T.E.B Clarke for the best film story of that year, The Lavender Hill Mob.

Born in Birmingham in 1896, Balcon began his career in films just after the First World War. It was in 1938 that he went to Ealing, being invited by an old colleague of his. He never actually lived there, having bought a house in Sussex.

It was at Ealing that the studios, which had existed since about 1904, enjoyed its golden years. Much of this must be credited to Balcon for he chose the directors, writers, actors and technicians. The aim was for quality, not quantity, and only an average of six films per year were produced. Not long after Balcon’s arrival there, war broke out and the studios, which were damaged by bombing during the Blitz, produced war films. They included Went the Day Well, about the need for vigilance against Fifth Columnists; and Nine Men about soldiers battling against the odds in the Western Desert. There were also ‘slice of life’ dramas about ordinary people, with It Always Rains On A Sunday being perhaps the most noteworthy. The Blue Lamp film introduced the popular TV policeman PC Dixon.

Perhaps the most famous of all were the Ealing Comedies, the first being Hue and Cry in 1946 and the last being The Ladykillers in 1955. These showcased the talents of rising British actors such as Alec Guinness, Peter Sellers and Sid James.

Balcon was knighted in 1948 and later claimed that his years at Ealing Studios were the ‘most rewarding years of my personal career and perhaps the most fruitful in the history of British film production’. Some of the films were partially shot in Ealing and it is possible to see Pitzhanger Manor in the supernatural film Dead of Night and Gunnersbury Park in The Lavender Hill Mob. Some films were partly shot in Australia and Africa.

However, the studios were sold to the BBC in 1955 and Balcon founded Ealing Films Ltd., using offices in Queen’s Walk in north Ealing. Only a few films were made from here; including Dunkirk and the last film the company made, The Siege of Pinchgut, a hostage drama set in Australia and made in 1958.

Listen to a talk

There is a talk at Ealing Library on 28 November about Balcon and the Studios. Find out more on the CSS website closer to the date of the talk.