Home > A century of suffrage in Ealing: Fact and fiction 100 years on 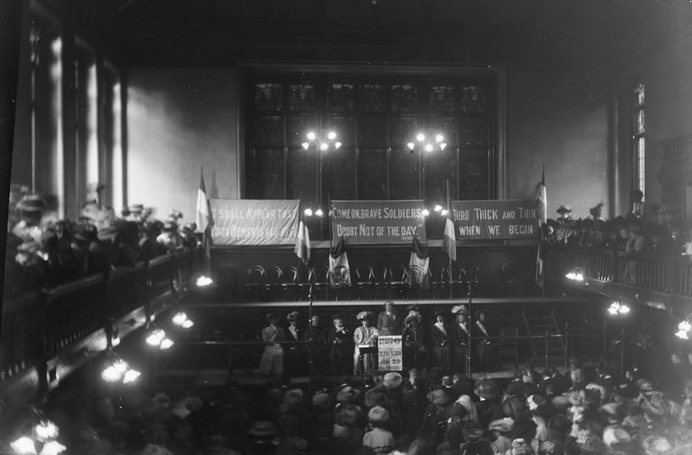 A century of suffrage in Ealing: Fact and fiction 100 years on

It is often said that 1918 marked a milestone in suffrage, as the year when some British women first had the right to vote and that this was achieved by the Suffragettes’ famed pre-war struggle, writes borough archivist Dr Jonathan Oates.

In reality, women householders had been able to vote in local elections since the late 19th Century and could be elected to councils (e.g. Councillor Miss Smee of Acton), whilst many men were unable to vote in any capacity whatsoever until 1918; so that year was as much about male enfranchisement as that of women.

Although suffrage was one of several big issues dominating the Edwardian political scene, it was not as clear cut as some suggest. There were a number of women’s groups locally who were interested in the subject.

There were the suffragists, men and women who campaigned peacefully through meetings, letters to the press and petitions for women to be allowed to vote in Parliamentary elections. Their activity was prominent, but now is not well known.

The West Middlesex Branch of the London society for Women’s Suffrage, founded by 1908 had a number of members in Ealing. The Hon. Secretary was Mrs O’Regan of 15 Clovelly Road.

By 1910 there was another similar group, the Ealing and Acton Women’s Suffrage Society. This was stated as being ‘Law-abiding and Non-Party’. The joint honorary secretaries were Mrs Edgar Morris of 30 Hollingbourne Gardens and Miss Catherine Comins, 115 Kingsley Avenue; the treasurer was Miss E.C. Gordon of 25 Hamilton Road.

Then there were the suffragettes who were better known because they committed acts of violence, mainly against property but also occasionally against people. Naturally the press gave them far more coverage than the more peaceful groups. In July 1907 there was a large gathering at a garden meeting at 16 Montpelier Road, Ealing (pictured above), of the newly formed West Middlesex Central Society for Women’s Suffrage. Millicent Fawcett was a speaker on that occasion. Two years later, Marion Wallace-Dunlop, daughter of the house’s owner, Lucy Wallace-Dunlop, and an artist whose work had been displayed at the RA, was jailed and was the first woman to go on a hunger strike.

Finally, there were the women’s anti-suffrage groups, who campaigned against women being allowed to vote for MPs. They campaigned just as vigorously as the other groups. The Ealing branch of the Women’s National Anti-Suffrage League contained many prominent local women. Its chairman was the Countess of Jersey, a well known lady who lived at Osterley Park. Mrs Forbes, a widow, of Kirkconnell, Ealing Common, was the president; Miss MacClellan of 35 Hamilton Road, the honorary secretary; with an engineer, a man, L. Prendergast Walsh (possibly a relation of Mrs Forbes), being the treasurer. There was also a South Ealing, an Ealing Dean and a Chiswick branch. In July 1909 there was an anti-suffrage garden fete at Kirkconnel, a house in Gunnersbury Avenue owned by Mrs Forbes.

Most of these women were well educated and middle class, married to or/and daughters of prosperous professionals and businessmen. Many lived in the same parts of Ealing and so presumably knew one another. To an extent the suffrage issue was as much about class as it was about gender.

Despite all the pre-war controversy, which mostly ceased with the advent of world war in 1914, Parliament decided in 1917, without much debate, to pass the Representation of the People Act which enfranchised women over 30 (extending to 21 in 1928) and all men over 21.