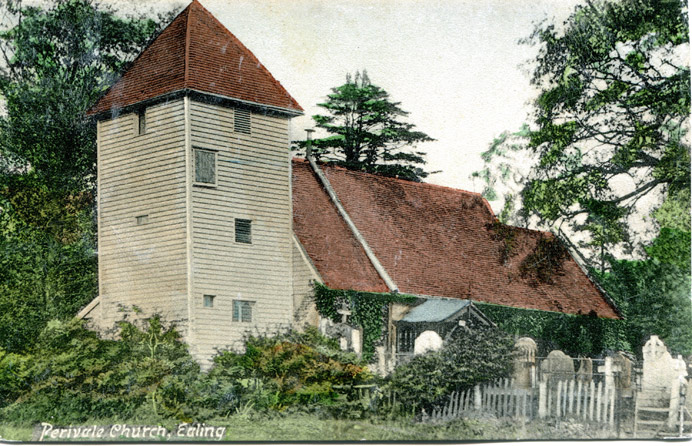 In 1963, church historian Eric Beavis published a book: Perivale – Its Manor, Church and Patronage. More than 50 years later, his daughter Hilary has published an updated version to reflect the remarkable resurrection of the medieval St Mary’s Church.

St Mary’s was founded in the 12th Century. It would have looked very different then, with an earthen floor, no windows and probably a thatched roof. The chancel was added around 1250 and the vestry and wooden tower about 1510. Its ancient history makes it worth a visit each year during the Open House weekend in September.

The rural community of Perivale preceded the church and appears in the Domesday Book of 1086. Asgar the Saxon was lord of the manor at the time and he let one part of the land to his custodian, Azor, who is described in the records as horse servant to King Edward the Confessor.

Perivale’s farming existence, primarily wheatlands, continued down to the end of the 18th Century. Thorne’s Environs of London, published in 1876, described it in the following way: “Considering its nearness to London, Perivale is a curiously lonely-looking place. It lies in the valley of the Brent among broad meadows, the four farms being all hay-farms and no other houses. In the entire parish of 625 acres, there were in 1871 only seven houses and thirty-three people.”

Perivale is one of the smallest parishes in the Diocese of London. In 1930 a Sanderson’s factory was built, followed shortly afterwards by Hoover. There were no buildings north of what is now Western Avenue, except the two farms of Alperton and Manor and two cottages.

Throughout all these changing centuries, St Mary’s remained a constant.

The 1960s were quite turbulent for the parish. A serious structural fault arose in the Chancel of St Mary’s.  An article headed ‘Church in danger of falling down’ appeared in the Middlesex County Times and West Middlesex Gazette dated 7 November 1964. It reported that “the chancel wall had slid about four inches outward and the building could be heard cracking on its unsure foundations.” Concern for the deterioration of the church was shown by local historian Norman Tams who informed groups in Ealing and the surrounding area of the state of the building and churchyard.

With the building falling into ruinous state, in 1976 Ealing Town Planning Committee discussed a proposal for declaring St Mary’s ‘redundant’.

Salvation – and the future

But so much concern was raised about the church, that eventually a voluntary group was established: The Friends of St Mary’s, Perivale. It was registered as a charity and took over the administration of the church – and later the churchyard. Following much negotiation, initiated by founder chairman Professor Alan Gillett, a 99-year lease was granted by the London Diocesan Fund. And new life could be breathed into St Mary’s.

Activities for the community became a regular feature, such as exhibitions on local themes and history workshops for children from local schools, which continue to this day. To begin with there were also flower festivals, young musician concerts, guided walking tours, talks, and plays; and there was a pageant to mark St Mary’s 850th anniversary in 1985. There are still well attended annual events including at Lent; services of Remembrance in November, Advent readings with music; and Christmas carols.

Free music concerts are also a regular feature, with a retiring collection to pay all the musicians and cover the church’s expenses. The principle aim is to maintain the church and churchyard for future generations in a pristine condition, with sufficient financial reserves to cover any problems.

The revised edition of the book by Hilary Beavis is available at £8 from Pitshanger Bookshop, Perivale Christian Bookshop and Waterstones, Ealing Broadway Branch. It is also in e-book format.

A shorter version of this article appeared in the spring 2016 edition of Around Ealing.