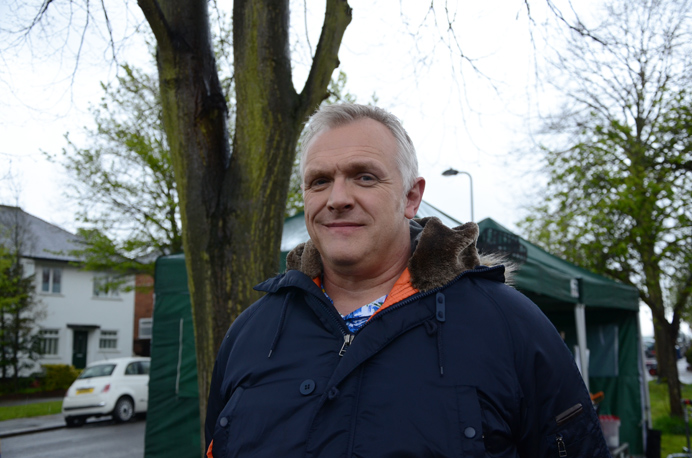 It is raining. A lot. And a normal Greenford street is not so normal today. A film crew is camped in a marquee on the pavement with van-loads of equipment, in front of a home that it has taken over. Meanwhile, comedian Greg Davies watches a screen intently as a scene is being shot.

As it happens, it is a very noisy scene which we slowly learn involves some kind of model boat being smashed in a bedroom in a typically manic and madcap plot that fans of Man Down will be familiar with. They have been in Hanwell and Greenford all week at this point, aided by the council’s West London Film Office.

Man Down is a farcical Channel 4 comedy written by Greg Davies. The last series, which was a ratings success, was in no small part filmed in Ealing. The new series has been, too.

As well as pulling the strings on Man Down, Greg is a long-term stand-up comedian and is also well-known for his roles in the In Betweeners and BBC comedy Cuckoo (not to mention panel shows).

We, that is Ewan Willmott (EW) and Around Ealing editor Richard Nadal (RN), went to meet Greg (GD) on set and had a chat in-between him shooting scenes. Our umbrella soaked to the point where rain was dripping through, and coats sopping wet, Greg genially beckoned us under a fresh umbrella with no leaks and we craned our necks to look up at the tallest man either of us have ever met. He was very generous with his time, despite being on a tight schedule. And despite having been asleep having a well-earned nap when we first arrived. We asked him if waking up to our presence was like a nightmare and he kindly said ‘no’.

EW: You used to be a teacher, in Sandhurst School in Berkshire, which you now use as a set in Man Down. What was it like to go back to your old school to film?
GD: Sort of surreal. We filmed in the classroom that was my classroom when I taught there. It felt alarmingly familiar. Very strange.
RN: Were the children any better behaved than in the programme?
GD: We had to film in the hols so they weren’t there. I like going back. Strangely comforting. I suppose because I spent most of the time there wanting to do something else. Sorry kids.
EW: You were a teacher in the In Betweeners as well. Were you approached to be the teacher from the beginning?
GD: I was in the pub with the two writers of the In Betweeners when they got the commission through for the pilot so I was in the right place at the right time. They’d seen be do stand-up so they said ‘Wheeeey, we’ve got a pilot, do you wanna be in it?’
EW: Did they know you’d been a teacher?
GD: Yeah, I do a lot of stand-up stuff about teaching; which is why, in my show, the coach had to be teacher. Because I’d been a teacher I thought about being someone else in the new show but it seemed like a lie. So I thought ‘oh well I’ll be a teacher again’.
EW: You must get a lot from being a teacher to write Man Down?
GD: Of course, although we’re not so much in the classroom this series. But, yes; definitely. Although it is obviously grossly exaggerated; it’s a preposterous programme.
EW: Do you approach writing to create absurd characters? You seem to be either an absurd character in a normal setting or a normal character in an absurd setting.
GD: Hmmm, yes. We seem to be increasingly absurd characters in a normal setting. We try to dance along the line of what could feasibly happen. A couple of times this series we’ve jumped right over the line. The whole starting point is just to make the show as funny as possible. And to make me laugh. The sillier it gets the more I find it funny.
RN: The conga in and out of the toilets in the last series made my wife and I fall on the floor laughing.
GD: Pleased with that. Thanks. I’m glad. That’s what we like. It’s not very fashionable, slapstick; but we like it.
EW: Writing for stand up and writing for the screen, do you find that you end up writing for one and thinking that it could work well in the other?
GD: There’s quite a lot of crossover between my stand-up and Man Down. A lot of the things are based on things that have happened but just grossly exaggerated. I did a whole section about a game we used to play with snorkel parkas and we ducked into a music room to annoy the people in there. And that ended up in Man Down.

RN: I was wondering about the snorkel parka game. Did you shoot that in Ealing? In Northala Fields?
GD: Yes, you’re right! It’s strange sometimes, actually. I’m sort of surprised when I write a script then see it on the screen as it often doesn’t look the way I thought it would.
EW: The creative process changed it a bit, yeah.
GD: Yes. With stand-up it’s 100% me from development to delivery, but with writing for the screen there’s a whole army of people.
EW: Is this the first programme that you have written?
GD: I used to be in a sketch group called We Are Klang and we did a series for BBC3 and I co-wrote that but this is the first one that I have created on my own. I have help writing it but I created it.
RN: Did you do comedy even when you were a teacher?
GD: I was a tedious show-off, for sure; as any of the children I taught would tell you.
RN: We’ll have to ask a few of them.
GD: If anything I’ve calmed down now; I’m getting it all out my system. Now I’m bearable company…though some of my cast members may disagree.
RN: Have you had to get a bit more sensible now you are better known, then?
GD: I don’t know about that. A lot of it just gets burnt out of my system.
EW: Do you still keep in touch with teachers you used to work with?
GD: Oh god, yes. Some of my best friends are teachers.
EW: Have you ever played at the Ealing Comedy Festival?
GD: I’m not sure I have. I’ve played in Ealing. When I was on the circuit there used to be a gig at Ealing Studios. I lived in west London for 20 years in Isleworth and Hounslow so I’ve done lots of gigs in the area in the past.
EW: It’d be great to get you down to the Ealing Comedy Festival.
GD: Well, when I start doing stand-up again maybe I will. I’m going to try and do a tour next year. I’m very rusty because I haven’t gigged for about three years.

…for the new series of Man Down, which is due to be aired on Channel 4 at some point during the summer.