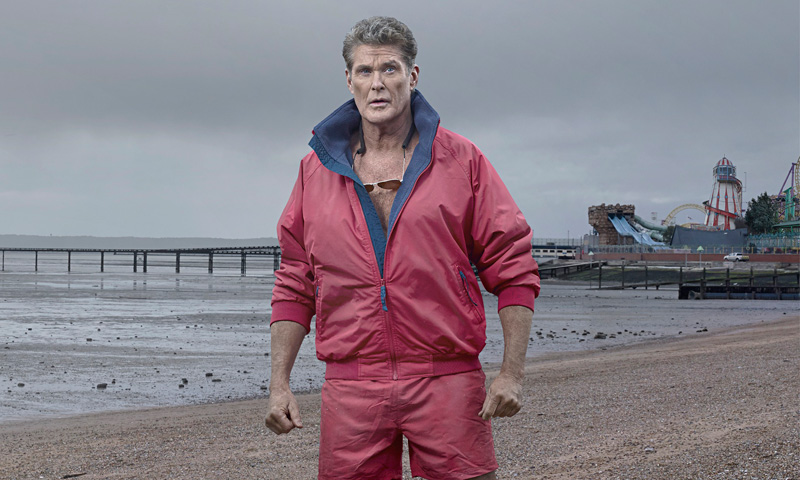 Hoff The Record is a new comedy for the Dave channel starring David Hasselhoff, who everyone remembers as an actor driving a talking car…

…and as a singer who claimed he helped to bring down the Berlin Wall.

David Hasselhoff has built a resoundingly successful career since the talking car, but is pretending that he has not in Hoff The Record. In it he tries his hand at a few new ventures to reignite his supposedly flagging career.

The West London Film Office (based at Ealing Council) helped out the Hoff by booking his crew into a road in Chiswick to film in the Chiswick Point Apartments.

On a more serious note, Stephen Poliakoff filmed beneath Isambard Kingdom Brunel’s Wharncliffe Viaduct in Hanwell for a new six-part drama Close To The Enemy. Set just after the Second World War, it follows Jim Sturgess (One Day) as Capt Callum Ferguson who is charged with making sure a captured German scientist stays captured and starts working with the RAF on developing the jet engine.

A member of the production crew told West London Film Office that the scene in Hanwell had been written specifically to be set under the famous Grade I listed viaduct.

Back on to the funnies again. Toast Of London, starring Matt Berry (The Mighty Boosh) and Doon Mackichan (The Day Today), visited a few of the West London Film Office’s Harrow locations recently.

Fresh from his award for best male performance in a comedy programme at this year’s BAFTA TV Awards, Matt Berry took series three of Toast Of London to Canon’s Park in Harrow to be the backdrop for a glass painting shot. We hope the park was an inspiration for them.

Birds Of A Feather is back for another series and brought its crew to the West 5 Club in South Ealing in August.

The programme’s theme song, What’ll I Do, was written by Irving Berlin, who died less than a month before Birds Of A Feather first aired in 1989.

Finally, our TV commercials request section. Over the past few weeks our advertisers have been working tirelessly around the borough in an attempt to compel you to buy an expensive house, a luxury car and other high-end lifestyle items, then sit down and have some toast with chocolate spread. And, why not?

West London Film Office – find out more and also register your property as a potential TV or film location.