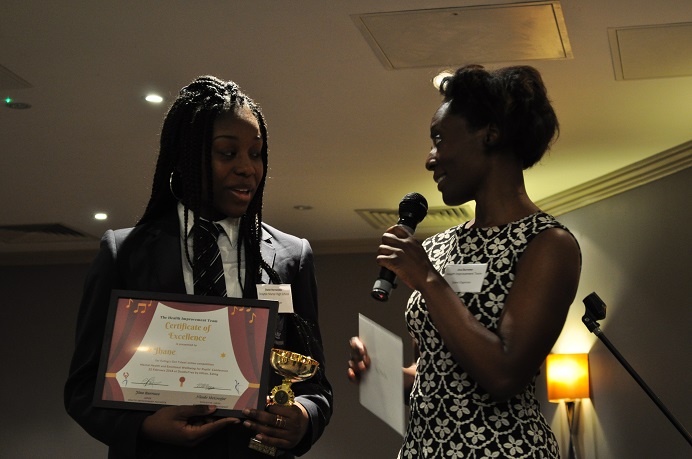 A school pupil won Ealing’s Got Talent for a song about the pressures young people face through social media.

Ealing’s Got Talent is a borough-wide competition for schools organised by Ealing Council for students to showcase their skills in music, dance and drama. The competition theme was mental health and emotional well-being, because YoungMinds estimate that, on average, three pupils in every UK classroom have a mental health problem.

The secondary school winner was Jhane, known as Lyric because of her songwriting skills, who attends Drayton Manor High School in Hanwell.

She said: “The social pressures present in the lives of almost every teenager because of social media, celebrity status and depictions of what is said to be ‘perfect’ was the driving force behind the creation of this piece.

“After speaking to friends, family and other peers it was evident that in today’s society many young girls and boys are experiencing stress and anxiety as they are trying to live up to the unrealistic expectations set out by societies most watched individuals – celebrities. Through this song I want to encourage students to forget about these unrealistic expectations and begin accepting themselves and their own beauty as perfection.”

Lyric’s song is available to listen to and watch at the top of this story, or by going on to the Ealing Council YouTube channel.

The other Ealing’s Got Talent winner was ‘Mini Hoops’, from Grange Primary School in Ealing. The youngster, whose real name is Nyla, is on the high functioning end of the autistic spectrum and found school life very difficult before she found her creative outlet – hula hooping. She wanted to show other children that not everyone fits one box socially and academically, and that everyone has something that makes them special no matter who they are and what they may suffer from.

The two winners that were picked got to perform their act in front of a number of teachers and mental health speakers at the annual school conference as well as performing in front of the deputy mayor of London Joanne McCartney at City Hall for a Healthy Schools London celebration event.

Nominations are open for pupils to enter the 2018 Ealing’s Got Talent competition on the egfl website.