Home > ‘Why wouldn’t you want to have an apprentice?’ 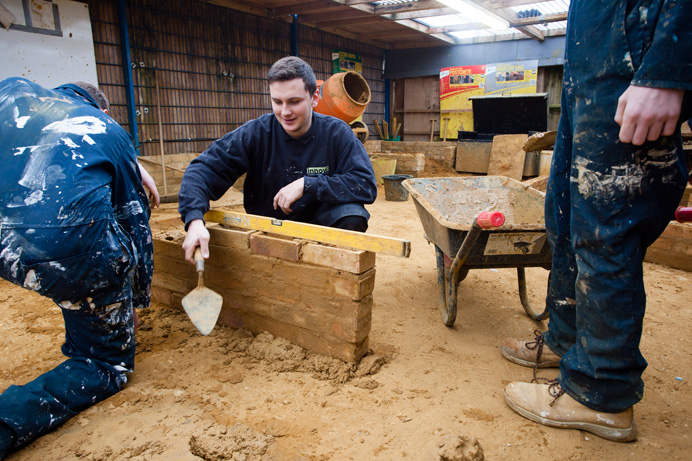 ‘Why wouldn’t you want to have an apprentice?’

“It has worked so nicely and it was almost like having a personalised service come in and help,” said Matt Blair, whose company has taken on its first apprentice with Ealing Council’s help.

Liam Barber, 20 (pictured above), was taken on by Matt’s company, Innov8 Training and Development, as a learning and development apprentice as part of a scheme run by the council’s Ealing Apprenticeship Network (EAN).

The EAN started its 100-in-100 campaign in 2013 to encourage local businesses to take on apprentices. Each year, the campaign has run for 100 days between September and December with the aim of creating 100 pledges for apprenticeship placements for young people: A target which has, for each of its three years, been smashed.

Innov8, based in Hillingdon, joined up during the 2015 campaign and, subsequently, took on Liam to fill their role.

In return for setting up an apprenticeship, local businesses can expect to receive full support around the process of hiring, employing and training an apprentice to ensure that both employer and employee get the most out of the placement.

Businesses can contact the team any time of the year – it is not just restricted to the months of the campaign. Interested? All you have to do is get in touch using the contact details on these pages.

‘The key to the future of every industry’

Liam’s line manager Simon Hayns, who is lead tutor, said: “I believe apprenticeships are the key to the future of every industry in the country. Why wouldn’t you want to have an apprentice? There are so many benefits. And, for us, it seemed like the natural thing to do. People leave here with the qualifications to set them up for life. So, it is effectively the kind of thing we do here anyway. We support the idea massively and would have more apprentices if we had the space here.

“From the business’s side of things, you can mould someone to suit you and the company’s ethos, and train them into a role. It is in no way a short term thing – we see it as an opportunity for someone to become a full-time member of staff. Progression is key.

“For the apprentice, the scheme opens the doors to companies willing to give you an opportunity no matter what your background in life. There is something for everyone and the chance to build a career.

“We hope Liam will be the first of many here at Innov8.”

‘It has made a big difference’

Liam first came across Innov8 as a school pupil studying in its construction classes. When the opportunity came up to become an apprentice there, he was delighted. He started in October 2015.

“I love working here,” said Liam. “I support the tutors in the classes, mostly in construction, which is my area of expertise; but I am also self-trained in working with motor vehicles and I am studying further in that area to help me be able to guide students, as well as develop my own skills.

“I really like the teaching because you are giving people an opportunity and guiding them – helping them achieve. I like doing that. They get the basic skills they would need to approach an employer to start a trade.

“I would tell anyone considering an apprenticeship to do it. It is a brilliant scheme. It can take you in many more directions in life than you might have thought of. You can progress with a qualification, build your experience and also be in a position to take advantage of opportunities that come up – which you may not have expected. That is what happened to me.”