Home > ‘Who hasn’t filmed in Ealing?’ 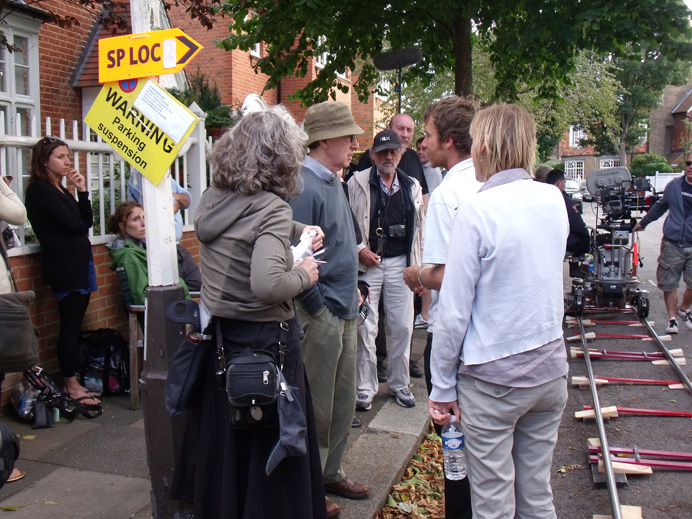 ‘Who hasn’t filmed in Ealing?’

London has been named one of the most filmed locations in the world, and may have overtaken Los Angeles and New York to become number one. “And Ealing is part of it…and not just a bit part,” said Mike Liddall, who is head of the West London Film Office.

The film office is based at Ealing Council and, every month, handles hundreds of requests ranging from student film-makers through to big TV commercials and dramas, right up to Hollywood blockbusters. All want to film in the borough – and also in Harrow, which the office covers too. It has never been so busy.

From Disney to HBO…

“This borough is the film and TV engine room of London,” said Mike. “Acton is home to a lot of the industry’s supply chain companies, from prop hire to

lighting and cameras. And, of course, there is the world-famous Ealing Studios here – and a whole lot of other studios which are less well-known but just as significant.”

His colleague, Ewan Willmott, continued: “And Ealing and Harrow provide a film location manager with plenty of options when it comes to finding the right place to bring the director’s ideas to life.”

Tax breaks introduced for filming in the UK have helped encourage big Hollywood films to choose London. Since 2010 the government’s UK Film Tax Relief programme stepped up a gear and has lured major franchises like Disney’s Star Wars, Warner Bros’s Marvel Comics and Paramount’s Mission Impossible. These tax incentives have since been widened to include high-end television drama, resulting in HBO’s 24 filming in Acton with a budget of £6million per episode in 2013. Animation, video games and children’s television have, unsurprisingly, all followed. And it is anticipated in some quarters that the final figures for 2015 could place London as the world’s biggest film location in terms of ‘location spend’ for the first time.

‘Who hasn’t filmed in Ealing?’

It has all resulted in a veritable constellation of stars passing through Ealing – from Brad Pitt, Eric Cantona and Freida Pinto to Ricky Gervais, David

Hasselhoff and Emily Watson – as noted in the Reel Life blog on Ealing News Extra.

“From your Nicholas Cages to your Madonnas and your David Beckhams to your Aishwarya Rais, we’ve catered for them all in Ealing,” said Ewan. “‘Who hasn’t filmed in Ealing?’ might be a better, if not more difficult and time-consuming, question.”

Mike added: “Most residents will be accustomed to seeing film crews around the borough and many neighbourhoods will have been certainly less than the fabled six degrees of separation from icons of the industry such as Woody Allen, Brad Pitt or Tom Cruise – whether they are aware of it or not.”

Making it all happen

The West London Film Office, with more than 20 years of industry experience behind it, helps make it all happen by proactively approaching film-makers and helping to find locations. Producers also rely on the office to facilitate the less glamorous essentials such as parking, road closures and car park gate opening.

“From the suburban settings of W5 and W7 to the bustling city feel of W3 and W4, the borough has a healthy variety of filming backdrops,” said Ewan.

The borough has more than its fair share of fine parks, and a huge variety of private houses and council homes, too. And Mike said: “Some of these are firm favourites of well-known TV producers who keep bringing their shows back to the borough – such as Silent Witness, now in its 20th year.”

Ewan added: “Mark and Sophie’s wedding in Channel 4’s Peep Show was shot in St Mary’s Church in Hanwell. BBC3s People Just Do Nothing had their pirate radio station film, legally, in a flat in South Acton. The list goes on and on.”

But it is not always easy, as Ewan explained: “Setting up shoots means getting the right people involved. We don’t want to close a road for a crucial scene only to find roadworks there on the day; or the circus coming to town on the day we’ve got a deep and meaningful romantic scene scheduled.”

So, what have been Mike’s and Ewan’s favourite shoots in Ealing?

Mike said: “My favourites have included George Cole playing Minder in Churchfield Road W3 – his famous car lot is, alas, no longer there; and there was an Italian Vogue photo shoot too.”

Ewan said: “I’ll always have fond memories of when the Charles Hocking House council block in W3 took on the altogether more princely title of Peter Andre House for Charlie Brooker’s production A Touch of Cloth.”

Could your property be filmed?

If you are the owner of a property and you are interested in letting it out to film companies for use as a TV or film location, you could earn some money. Private residential properties can earn between £500 and £2,000 per day and industrial or commercial properties can command up to £5,000 a day. Get in touch with the West London Film Office to find out more.