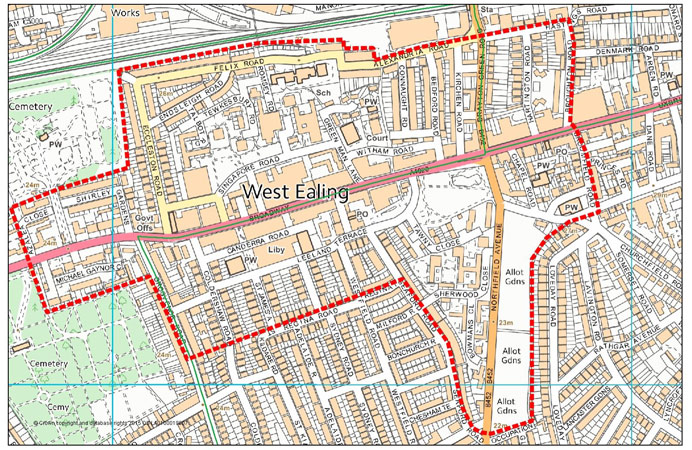 West Ealing is to become a ‘protected’ zone from April with the aim of improving the quality of life for residents after the idea was backed by nearly four in every five of the local people who responded to a survey.

The six-week public consultation ran in November and December, asking residents what they thought of Ealing Council putting a legal order in place in West Ealing to help ensure the law-abiding majority of people feel safe to use and enjoy public spaces.

It will work by giving powers to the police and council enforcement officers to help them to deter trouble – and to deal with persistent problems ‘on the spot’.

Overall, 77% of those who responded to the survey said they completely supported the introduction of the public spaces protection order (PSPO), with another 14% very much supporting it. Only around 3% said they did not support the idea at all.

Views tended to be fairly clear across most of the survey. There was overwhelming support for all 10 key proposed ways the legal order would give officers powers in the zone, with the percentage of people strongly agreeing with the proposed measures ranging from 75% to 93%.

The reasons for this appeared pretty definitive – a sense of intimidation in public spaces in the area and a perception of a lack of safety, particularly at night.

While, during the day 58% of respondents said West Ealing’s public areas were either very safe or fairly safe, 17% said they were ‘neither safe nor unsafe’ and the remaining 25% thought they were either fairly or very unsafe.

These answers changed dramatically when the survey asked how safe the area was at night, with 77% of respondents saying it becomes fairly or very unsafe; 10% opting for ‘neither safe nor unsafe’; and only 11% choosing very or fairly safe.

Several local groups that help vulnerable people in the area had already been consulted on the ideas being proposed, including Ealing RISE Drug and Alcohol Service and St Mungo’s homelessness charity. The contents of the proposed order were revised several times following their feedback.

The PSPO was due to come into force across West Ealing on 3 April. It will last for three years, until 2020, unless the council looks at varying its length during that time.

WHAT DID PEOPLE SAY?

Some of the comments made by people completing the survey were indicative of the swell of opinion in favour of the zone.

“I think this idea is fantastic and will make the area nicer for all. There are lots of young families in the area so it should feel more safe,” said one respondent. And another simply said: “The questionnaire covers all the points. Fundamentally, West Ealing needs ‘cleaning up’”, while another said: “I witness groups of people and individuals drunk, high and sometimes fighting among themselves,” and said they felt scared to take their dog for a walk in the dark.

“I live with my young family on a road a short walk away from Uxbridge Road,” said another resident, “and am regularly faced with seeing drug taking, drug dealing, street drinking and the detritus left from such activities on my road. I want my family to feel safe and to be able to use public facilities without fearing for their safety either as a direct or indirect result of anti-social behaviour. The powers that a PSPO area would give law enforcement seem appropriate to tackle such problems.”

And their view was supported by another person, who said street drinkers were so intimidating that it “affects [my] home and day to day life and makes me feel unsafe and I often need to change my day to day activities to avoid them.”

With a positive hope for the future, another comment was: “West Ealing will prosper once more when residents are proud of their town, and visitors are not afraid to visit!”

‘MAKING SURE PUBLIC SPACES ARE WELCOMING’

Councillor Ranjit Dheer, the council’s cabinet member for community service and safety, said: “Anti-social behaviour can intimidate people and prevent them from enjoying public spaces such as parks or playgrounds.

“Residents’ associations told us they were concerned about littering of drug paraphernalia and the impact this has on children; and local companies pointed out the negative impact on their business of street-drinking and associated congregation in certain spots.

“The PSPO is a way we, and our partners like the police, can work together to deal with these issues effectively. It is about making sure public spaces are welcoming, and not about restricting access to them. The idea is to discourage unwelcome behaviour from happening in the first place but, if a problem persists, the order would make sure it can be dealt with effectively.”

The order was drawn up with the aim of complementing a number of other schemes currently operating in West Ealing. For example, in one project, council has worked with the police and RISE and other partners to target specific individuals regularly in trouble involving public drinking – to either penalise them or get them help, as appropriate.