Home > ‘We need to look after this world for future generations’ 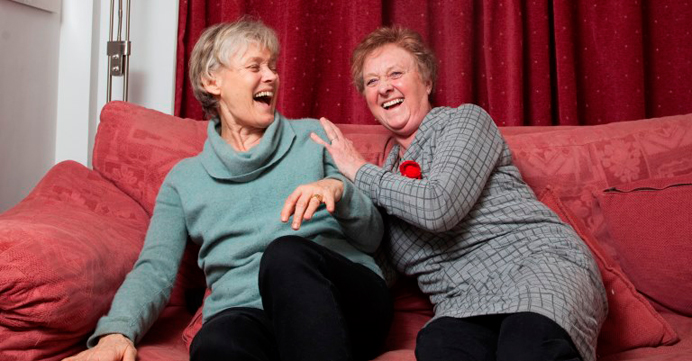 ‘We need to look after this world for future generations’

The way rubbish and recycling is collected in the borough will change in spring. Most households will receive two wheelie bins; a black one for rubbish and a blue one for mixed recycling. These changes are designed to encourage people to recycle more and throw away less.

Ealing News Extra sat down with two local residents, who also happen to be Ealing community champions, Kath Kingsbury and Ginette Gillard, to ask them why they recycle.

‘Only half a bag of rubbish now’

Kath explained: “I recycle everything that I can possibly recycle. All my food waste, except for meat, goes on to a compost heap. We have one in the garden and two at our allotment. Our cardboard goes into the compost too.

“I also recycle plastic and tins and take things that I don’t want any more to a charity shop. I’m a real believer in throwing out as little waste as possible and I’ve now got it down to half a carrier bag of rubbish a week.”

Ginette agreed: “I’m also very passionate about recycling; I think it’s incredibly important. I’ve got a compost heap too and my fruit and vegetable peelings also go on there. Food waste that is no good for the compost, such as citrus fruit and eggshells, goes in my green bin for collecting. I also recycle cardboard, paper and plastic.”

Kath continued: “Anything that can possibly be used again, I’ll try and find another use for. I’m a Brownie leader and I’ll try and reuse and recycle items through my group rather than throwing them away. I’m currently collecting old face cream pots and I’ll use them with my Brownies to make something else. It’s one of the ways that I try and teach the girls about recycling.”

Ginette said: “Yes, it’s really important that children learn about recycling through their schools, too.”

When asked if she could remember when she started to recycle, Kath said: “I’ve always recycled. My mum always believed that you shouldn’t waste anything – bits of string, bits of paper, everything was used again. I think it came from living through the war when she was short of everything. I’ve inherited that mind set from my mum and am now passing it on to my children and grandchildren as well as my Brownies.

“My husband is the same as me. He is a carpenter and if he sees a bit of wood in a skip he can’t walk past it. He’ll knock on the door and ask if he can have it and he’ll use it, because he hates to see wood thrown away.”

Ginette and Kath are community champions and both take a special interest in the local area. Ginette said: “I have a real thing about litter. I go around the playground and the railings every few weeks picking it up and last time I got three bin bags full. It just infuriates me; people drop it without thinking.

“I feel very strongly that wheelie bins are a good idea and will cut down on this. People put their black rubbish bags out too early and the foxes rip them open and the rubbish goes everywhere. It’s just horrible and it isn’t acceptable.”

It is our future and the world’s future

When asked why people should make the effort to recycle, Ginette continued: “For me, recycling is so vital for the future of this world, and we are all part of it. We need to look after this world for future generations.”

“I am sure that with more thought many people could increase their recycling. Hopefully they will get this very important message.”

Throwing your own money away

“I think that some people think it’s a nanny state or think: ‘Oh, why bother when it all gets chucked in landfill anyway’,” said Ginette. “I think if people realised how much money the council wasted in landfill charges it might change their behaviour. These people who don’t bother to recycle don’t seem to realise that they are literally throwing their money, and our money, away. Why would the council throw it all into landfill when they’ve gone to all that trouble to separate it in the first place and its costing so much money to get rid of it?”

Kath finished by saying: “What I’d like to say to people who don’t recycle is to recycle for your children and for your grandchildren.”

“Yes,” said Ginette: “And if you don’t have children, recycle for humanity. That’s the bottom line. It’s our future and the world’s future.”

To find out more about how to recycle in Ealing, go to the council website or, to receive updates on the new rubbish and recycling collections and wheelie bins, ‘like’ the Facebook page www.facebook.com/ealingrecycling

To find out more about how to become a community champion, email mywardmatters@ealing.gov.uk