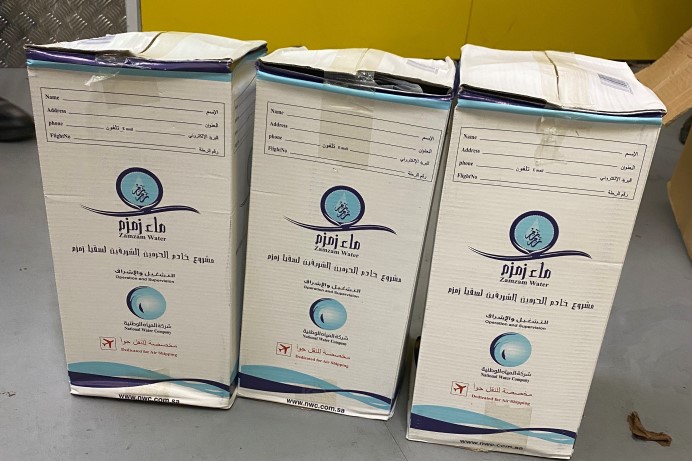 Ealing Council’s trading standards officers are advising the public not to buy water labelled as ‘Zamzam water’ because it could be fake and may pose a risk to health if consumed.

The warning has been issued on the eve of the Ramadan festival, after council officers received a tip-off that an importer based in Ealing had imported a large quantity of suspected illicit Zamzam water bottles.

More than 280 five-litre bottles were seized yesterday and are being processed for further examination, with officers launching an investigation to determine how they arrived into the country.

Zamzam water is taken from a well in Mecca, the holiest place in Islam. The product is considered sacred to Muslims and whilst tourists and pilgrims are permitted to bring back small amounts from Saudi Arabia, it cannot be exported for commercial use.

The batch discovered by trading standards officers is suspected to have arrived in containers from Turkey, not Mecca, and it will now be tested in a laboratory to determine its source and if it contains toxins that are harmful to the public.

Previous discoveries across the UK have found that unofficial Zamzam water on sale contained poisons and high levels of arsenic, which is a carcinogenic. It is not known if the batch in Ealing is toxic, but officers believe some bottles may already have been passed to distributors and sold to consumers prior to any tests being carried out.

Mohammed Tariq, Ealing Council’s senior trading standards officer who made the discovery, said: “We don’t know how these bottles entered the UK, and we obviously don’t know if they contain toxins but consumers should be aware of the risks of purchasing a product that hasn’t been tested before being put on sale.

“Our concern is that members of our Muslim community may be tempted to buy “Zamzam” water from street sellers with Ramadan set to begin on Saturday, 2 April.

“But people should consider avoiding the drink, until we can establish its source.

“The bottles will be formally examined, and an investigation has been launched. What we do know is that the bottles already fail the labelling requirements. There is no information to confirm their source or what ingredients they contain.”

“Members of the public should contact their GP if they start to feel unwell or suffer any adverse reactions after drinking this product,” he added.

If any member of the public becomes aware of Zamzam water being offered for sale or distribution in the borough they should contact the trading standards team by emailing tradingstandards@ealing.gov.uk.