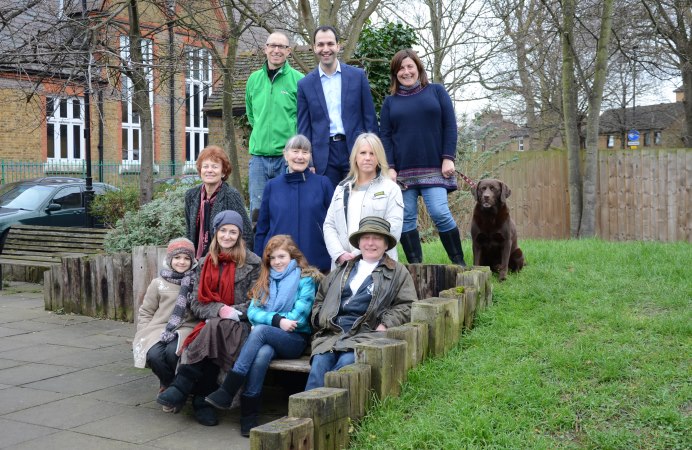 An enthusiastic group of Old Hanwell residents have been awarded £46,300 by the council to help them transform a small area near St Mark’s Primary School into a beautiful communal space.

The small green opposite Du Burstow Terrace is already a bustling walkthrough used by school children, commuters and dog walkers. Unfortunately, though, it has fallen into disrepair and sometimes attracts street drinkers and anti-social behaviour.

Thanks to the money awarded to the project by the council’s Transform Your Space project, the group is close to being able to create an open, airy space they will name Katherine Buchan Meadow.

They plan to remove the existing broken seating and timber wall that are hidden behind a large overgrown shrub and will re-route the pathway around the base of the newly reformed mound, placing a new, curved bench along part of its length. Removing the neglected shrubs will allow them to plant a ‘pictorial meadow’ framed on two sides by a beech hedge. A circular seat will be placed around one of the existing trees opposite the side gates of St Mark’s Primary School.

‘Such a big boost’

“This project will create a beautiful, tranquil place to be enjoyed by everyone in our local community,” said Amanda. “Having a communal space is so important to the people who live around here, especially because some do not have gardens; and, for others, we hope it will help relieve feelings of isolation by creating somewhere you might want to spend time and meet your neighbours.

“Knowing that the Transform Your Space judging panel saw the value in our project and awarded us the money is such a big boost for the project team, and we are delighted to be given this opportunity. We still have a little way to go to get the rest of the money we need, but using the Ealing Hive crowdfunding page on Spacehive is helping.

“The idea came from watching the comings and goings on the green and listening to neighbours unhappy with the hugely overgrown laurel and the rubbish left by the people who sat behind it, drinking and causing a disturbance. This led us to thinking about what we needed to do to create a space for the community.

“The local support has been amazing and will continue to be vital to the success of the project. You don’t have to be a gardener to get involved; we’ll have a few creative projects for you to be involved with, you just need to have a bit of spare time and enthusiasm.

“Having somewhere peaceful and beautiful to sit, enjoy the wild life and flowers and chat to your neighbours is going to be something really special and, hopefully, it will encourage a change in some of the unwanted behaviour around here, too.”

Sim agreed, and said: “I am really pleased that we can actually start planning when and how work can begin on the site.

“The plans we have for the space will really bring it to life. By taking out the old wall and installing a curved bench will create a great feeling of space.

“There are about 10 of us volunteering on this project at the moment, but we are always looking for more people to join in with the proposed community action days, initially getting involved in the development and in the long term the stewardship of Katherine Buchan Meadow. If you live locally, like the sound of our project and would enjoy helping, get in touch.”

The naming of the meadow will celebrate the life and community spirit of Katherine Buchan, who built and maintained four almshouses for women on the site in 1876. Her daughter later added another six, which remained for a hundred years until being pulled down in 1975/76.