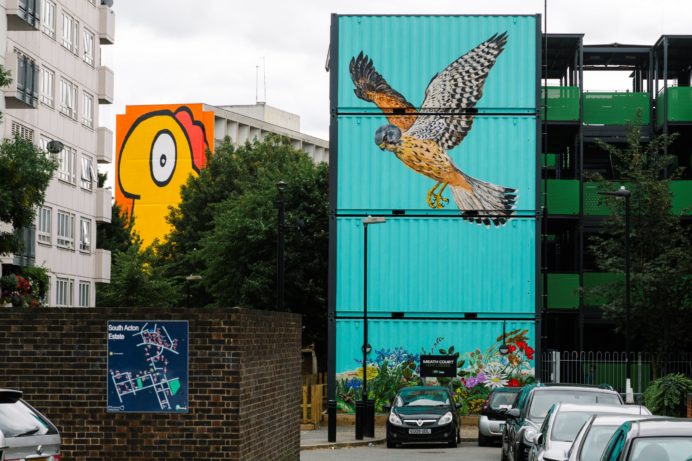 A huge bird of prey, sea creatures, bright colours, historical murals; South Acton is brighter than ever thanks to an urban art project that has brought grey buildings to life and made ‘a big difference to people’s daily lives.’

You can view a gallery of 29 images to take a look at some of the striking imagery dotted across the South Acton estate.

ARTification (formerly Acton Arts Forum) has been co-ordinating the project at the estate, which is being radically modernised in a 20-year regeneration scheme called Acton Gardens. The intention of the art was to keep a connection to the past, as well as brightening the site up, while the extensive building work took place.

The art group has led the community’s choice of the 20 pieces of public art so far through workshops with residents and artists, and liaising with Ealing Council. Hundreds of people have been involved and Rachel Pepper, director of ARTification, said its success has come from being rooted in the community in this way.

“We have had so many residents and people passing by telling us how much they like the painting and appreciate it being there,” said Rachel. “It makes a big difference to their daily lives and cheers them up.”

One of the most well-known pieces of the art was particularly designed in this way and sits beside South Acton station. The ‘Tree of Life’ highlights the area’s heritage and local community, as well as harking back to the origins of the town’s name, which apparently derived from the number of oak trees it had.

It was created by famous artist Carrie Reichardt (from the Treatment Rooms collective), who lives locally. Meanwhile, Karen Francesca was responsible for the distinctive mosaic bench in South Acton Recreation Ground, which is also replete with historical local references.

There are other pieces by European artists respected across the world such as Thierry Noir, who first came to the world’s attention with striking graffiti that adorned the Berlin wall.

Rachel said: “The rise of public art in South Acton has blossomed over the years because of its roots in the community. It has been successfully creating opportunities for local people and artists to design site-specific, evocative visual art in the urban landscape. ARTification’s bridging role as a ‘cultural connector’ is key to this complex meeting point in the everchanging social, spatial landscape.”

‘THE ART HAS HAD A BIG IMPACT’

Earlier this year, a disused garage site on the estate was used to install modular homes for homeless families and help tackle the housing crisis. It was named Meath Court and a kestrel was painted on one of the sides of the four-storey construction, above a wildflower meadow scene. It was done by Karen Francesca and ATM Street Art.

Jacqueline Simms, a Meath Court resident, said: “The art has had a big impact for residents. When people move in, it can be daunting for the children and getting involved in the art can help with their social, intellectual and emotional skills. They learn through play and it helps them express themselves, and it’s fun.”

Council leader Julian Bell said: “To see the community come together and combine their ideas and enthusiasm to continue the regeneration of South Acton is captivating. ARTification has started something special and it highlights what can be achieved when residents care about their community and the way it looks.”