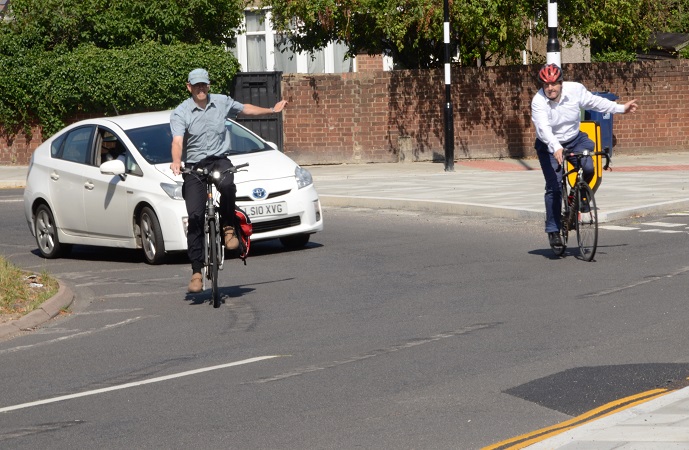 New ‘turbo-style’ roundabout up and running

An innovative new ‘turbo-style’ roundabout has been completed at a busy junction on the border between Southall and Northolt, improving congestion and creating a safer space for cyclists, drivers and pedestrians.

The roundabout, which is located at the meeting between Lady Margaret Road, Ruislip Road and Kensington Road in Southall, has been created as part of Ealing Council’s ongoing commitment to improve infrastructure and promote sustainable forms of travel across the borough.

The first of its kind in London, the roundabout is influenced by a Dutch-style ‘turbo’ layout and incorporates elements of this design. Turbo roundabouts create a spiralling flow of traffic to create a safer and more efficient alternative to the standard multi-lane layout. More than 200 have been introduced in Holland to date.

The circulatory lane of the roundabout has been narrowed allowing cyclists to stay central in the lane and not face being overtaken by vehicles.

Average speeds of vehicles have been reduced, making it easier to enter the roundabout. As a result, traffic flows more smoothly, without capacity being affected. The changes also reduce the number of conflict points where collisions could occur.

Two new zebra crossings have been added close to the roundabout and the crossings are now wider – meaning pedestrians can cross the busy interchange quicker and more safely even at busy times of the day.

Last month Councillor Julian Bell, leader of Ealing Council visited the roundabout to get a first-hand look at the positive changes. He said: “This innovative new design provides a safer interchange for cyclists, pedestrians and drivers and improves traffic flow.

“It has been shown safer streets, roads and crossings make people feel safer and more positive about their local streets. They are more likely to make journeys by walking and cycling – which is of course positive for the environment as well.”

“Helping people make that shift away from high-polluting vehicles to greener options wherever possible is central to our transport strategy, which we began to implement last year.”

The council has been working in partnership with Transport for London (TfL) on a wide-reaching programme of improvements to local roads and several initiatives have already been rolled out.

Enhancements to Sudbury Hill High Street were completed last year and the Live West Ealing programme is reducing levels of traffic and encouraging more sustainable forms of transport in areas around Uxbridge Road.

A 20 mile-per-hour (mph) speed limit is also currently being trialled in the borough, involving roads enclosed by the A406, A40, Greenford Road, Windmill Lane and the southern borough boundary. It was introduced in line with the Mayor of London’s programme to improve safety for road users. The previous phase was implemented across Acton last year and was found to be successful in reducing overall speeds.