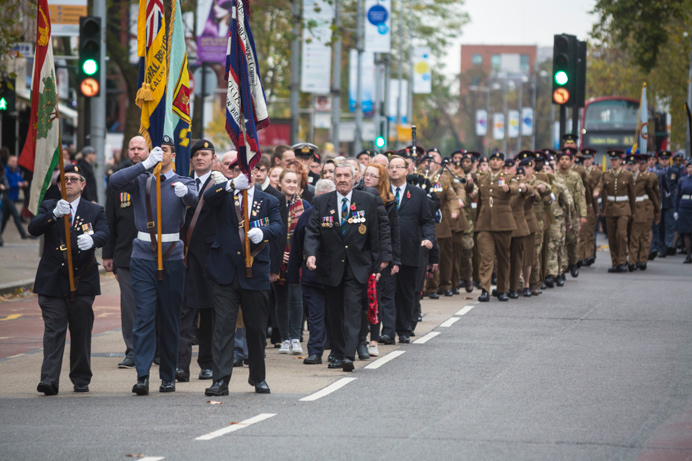 On Armistice Day (11 November), and on Remembrance Sunday (13 November) the country will stop to commemorate the sacrifice of our armed forces, past and present.

A two-minute silence will, as ever, take place for Armistice Day. And official Remembrance Sunday services and events will take place at war memorials across the country – and across our borough.

They will again take on particular poignancy this year, with the 100-year anniversary of the First World War (1914-18) continuing to be commemorated across the country. The council sowed poppies at a number of parks and open spaces across the borough in 2014 and they bloomed again this year. The red flower became indelibly associated with the First World War when they sprung up in the bloody killing fields of Europe, and have since become emblematic of the remembrance of sacrifice.

Mayor of Ealing, Councillor Dr Patricia Walker, is due to attend a service at Ealing War Memorial on Ealing Green, in front of Pitzhanger Manor, with a two-minute silence at 11am. Deputy leader of the council Ranjit Dheer is also due to attend.

The local branch of the Royal British Legion marches each year to Greenford War Memorial from its headquarters in Oldfield Lane South for a public service at 11am. It is due to be attended this year by council leader Julian Bell and deputy mayor of Ealing, Councillor Simon Woodroofe.

A parade also traditionally begins in Manor Park and passes through Southall on the way to Southall War Memorial on The Green for a service at 11am, this year due to be attended by previous mayor of Ealing, Councillor Harbhajan Kaur Dheer. The parade will then continue through the town.

For more information nearer the time, check the council’s website.

The mayor of Ealing is also due to attend an annual remembrance service at Acton Care Centre on 6 November.