Home > ‘The universe wanted me to run the half marathon’ 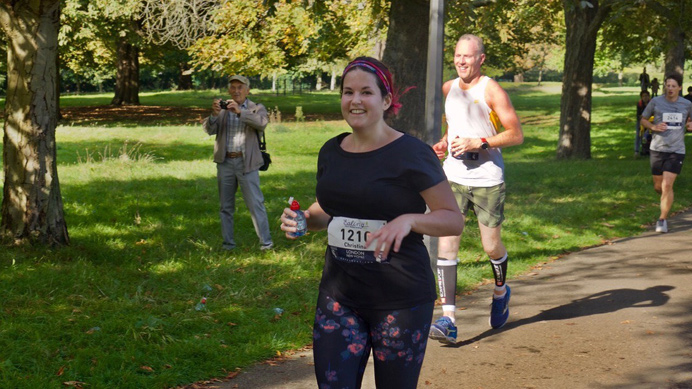 ‘The universe wanted me to run the half marathon’

During the summer, Ealing News Extra ran a competition to win a race place at the 2017 Ealing Half Marathon and some official gear. The winner of the prize, Christina Kenny, was delighted; and she raised more than £2,000 for charity after completing the course on Sunday (24 September).

Christina, who lives in Acton, said: “I’d never won a competition in my life before, so when Ealing News Extra got in touch to say my name had come out of the hat for a free place on the Ealing Half, I felt that the universe was maybe trying to tell me something.”

“I’ve been running for a few years,” continued Christina. “But nothing like this distance. I had 12 weeks to build up to 13.1 miles. Luckily, we have some beautiful places to run around in west London, especially near the river. It was also a great opportunity to raise over £2,000 in sponsorship for a brilliant charity, Macmillan Cancer Support, which helps people living with cancer.

“The day itself was a lot of fun with some incredible volunteers cheering us on all the way around the course. I made it round in 2hours, 7minutes, 8seconds – a time I’m hoping to beat next year. Next time, I’ll have to do some hill training, though, because I still can’t sit down properly after the race!

“I’d recommend the Ealing Half to anyone, especially people who don’t think they can do it. Go on – surprise yourself.”

Christina is still raising money for Macmillan Cancer Support via a Just Giving page, if you would like to donate.

Take a look at our gallery of pictures from Ealing Half Marathon 2017.