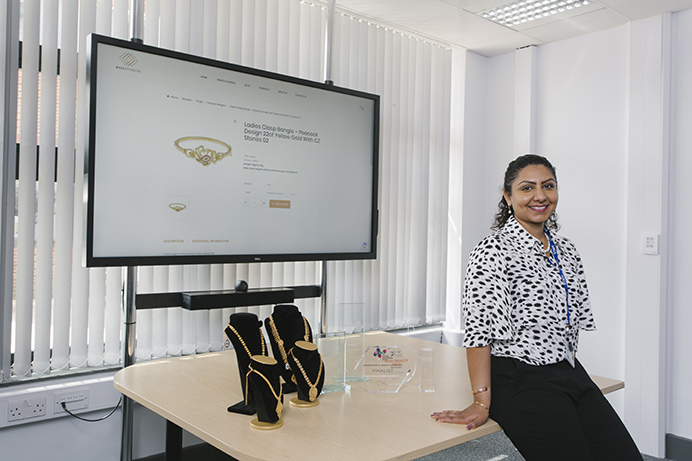 A package of free training and mentoring offered by the council has helped small, local companies to grow and flourish – including the ‘Uber of the gold and diamond industry’.

Over the last two years, Ealing Council’s regeneration team has been offering support to small businesses based in the borough through a programme, run with Branduin Business Support, that was fully funded by the council and backed by the Mayor of London.

It featured workshops led by expert trainers which covered topics including social media, customer service, winning contracts and business planning. And this was supplemented by one-to-one mentoring sessions and ongoing advice and support.

‘Helped me to think long term’

Southall businesswoman Sukhi Jutla is one of those to have benefited. With a business partner, she set up MarketOrders in 2016 – an online hub for the jewellery industry, which connects retailers and suppliers through an online platform, allowing them to source products without a middleman. It has won multiple awards for digital innovation since – while Sukhi has also won individual awards for her success as a businesswoman including being named Female Entrepreneur of the Year 2019 – UK in the Influential Businesswoman Awards hosted by Acquisition International.

She said: “We have built the platform and showed businesses that it can work, and have built trust, and now we are moving to the next stage. The support we received from the council and Branduin is helping us to do that.

“The pitching workshop helped me to learn how to present and talk to investors and made me more confident with pitching,” said Sukhi. “Three days after attending the pitching workshops I won first prize in a pitch competition which was £100,000 seed investment. I was also the only woman pitching out of 20 companies, so it was great to win. The mentoring sessions also helped me to plan my crowdfunding campaign and I ended up raising £448,420 with crowdfunding.

“In fact, the mentoring helped me to better organise myself in general and to think long-term about my business and how to strategise, rather than getting caught up in the daily nitty-gritty. It helped me to become better at forward planning.

“I have found local business support is more aligned and tailored to your business needs because the advice is more locally grounded and, therefore, more relevant.”

‘The Uber of the gold and diamond industry’

So, what are the secrets behind the success of the MarketOrders award-winning model?

“We are not a jewellery company,” insisted Sukhi. “I often say to people we are like the Uber of the gold and diamond industry. We are able to efficiently match the supply and demand for gold jewellery products in a historically traditional and opaque environment. Our platform makes it more transparent.

“Most retail shops on the high street are small and so do not need to buy in volume. They may want to buy one or two pieces of gold at a time, for example, but they normally have had no choice other than to buy-in at least 10 pieces of jewellery at once. And, to get people inside their shops, they need lots of different designs on display, so they sometimes buy something in just to have something on the shelves. But this can become an expensive way of doing things because, if any of it doesn’t sell they have to melt down the gold and sell it back at a loss.

“This is where we come in.

“We have created an online marketplace where our customers can order whatever they like – and it doesn’t matter about the quantity because MarketOrders aggregates all the small orders from the different retailers to create one large order to the supplier. So, a retailer can order just one piece and, if it sells, come back and order another five. And they don’t have to hold a large stock of something that may or may not sell, and potentially lose money on it all.”

Bringing the industry into the digital age

“None of our suppliers have an online catalogue,” explained Sukhi, “which may shock you. But it is how it has always been done all over the world and it has kind of worked for them, so they’ve carried on as they were. What we do is provide a way for retailers to see all of the designs and products online in one place and be able to order them in a simple, efficient way.

“There is no longer any need to go to the supplier to order-in lots of stock and have to second-guess what customers might want. Instead, now the retailers can get pre-orders from their customers and we can gather together all of those orders for each retailer and use our purchasing power to buy the goods from the supplier.

“In the past, retailers would rely on middlemen. And middlemen would rely on big, dusty, printed catalogues from the supplier – and then they would have to physically collect the orders from the suppliers. The whole process could take three to four months – by which time, the design may have even gone out of fashion or it might be a different season when other things are in demand.

“We have displaced that middleman, digitised the process and made it quicker and easier. Even the invoicing and shipping is administrated online. Which is why we have won awards for digital innovation. It is also cheaper for retailers, because our mark-ups are far lower, and it is good for the suppliers because their products are getting out to a lot of businesses and in a far smoother way.”

‘The phoenix that arose from the ashes’

Despite being showered with awards and the business growing year-on-year, it has not all come easily to Sukhi.

“This is not my first jewellery-related business, by the way,” she admitted. “This is my third attempt – the first two didn’t work out but I learned so much along the way that has enabled me to reach this point that I am at now.

“Without those experiences, we wouldn’t have learned from within the industry what we needed to do to create the right business model. MarketOrders started in 2016 and it was the first online version of the business. It was the phoenix that arose from the ashes of the other businesses, which were more along the model of the traditional wholesalers. MarketOrders is digitised, streamlined and the key for us is that we can buy in bulk and get discount savings; and everyone benefits.”

How co-working space has helped, too

Sukhi has been running MarketOrders out of an office in Brentford but also bases herself at a new co-working space at the University of West London, in Ealing, which opened last year. Co-working spaces are becoming ever more popular as an affordable way to build a fledgling business, but the Westmont Enterprise Hub is slightly different to most because it offers start-ups, entrepreneurs and young businesses free office space and support.

Sukhi said: “The Westmont Enterprise Hub is a pioneering hub of creatives coming together to learn, share and build. It has been great to have a community to learn from, and to share your learning, and – more importantly – to meet other start-up founders who are in the same boat as you, so we are all learning and growing together.”