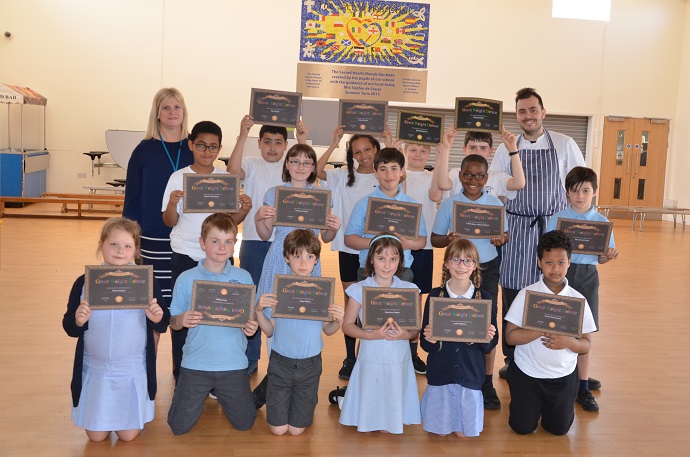 Children in England eat far more than their recommended daily amount of sugar – but Acton pupils  have won an award for their ‘sugar smart’ efforts to help tackle the problem.

According to Public Health England research, children are consuming half their recommended maximum daily intake of sugar at breakfast time; and by the end of the day have had more than three times the healthy limit.

In response to this, Ealing Council’s public health team ran a Sugar Smart Schools competition in which students had to design, develop and implement ideas to reduce sugar consumption in their school.

St Vincent’s Primary School in Pierrepoint Road, Acton, was declared the winner and picked up a £750 prize. The pupils came out on top against the eight local schools eligible to enter, beating Hambrough Primary in South Road, Southall, which came second and won a £250 prize.

The winning pupils who were part of the school debating team put together a presentation on why it is important to reduce sugar intake. They also got staff, parents and even members of the public in a coffee shop to fill out a survey on what they knew about sugar. They asked them to measure their sugar intake by downloading the Change4Life Sugar Smart.

Monica McCarthy, headteacher at St Vincent’s, said: “I am delighted that our pupils have been rewarded for their hard work in coming together to reduce sugar intake for pupils, teachers, and members of the public.

“It is important for us as a school to encourage positive action in being healthy and good results can only come when everyone is on board.”

Julie Lewis, director learning, standards and school partnerships at Ealing Council said: “It is really important to celebrate schools that come up with ways of cutting down sugar consumption. I was impressed with St Vincents Catholic Primary School pupils drive to cut down sugar not only in their own school, but also with members of the public in cafes.

“I would like to thank all of the schools that took part and would encourage others to download the Change4Life Sugar Smart App to track their own sugar consumption.”

This event was held as part of a Ealing Sugar Smart programme being run by the council’s public health team in an effort to encourage residents to understand the impact of sugar and to find ways they can cut it down in their diet.