Home > Stop. Look at the art. And listen to the safety message 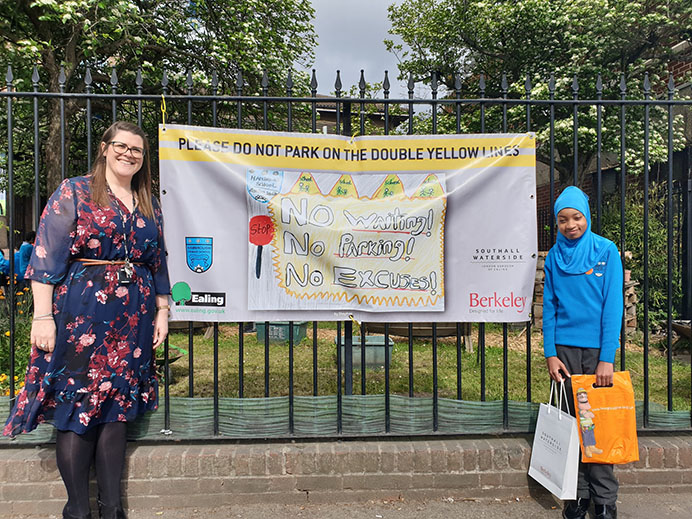 Stop. Look at the art. And listen to the safety message

Southall pupils were rewarded for their artistic work on a road safety awareness campaign at a series of prize-giving ceremonies at local schools.

More than 70 entries were received for a competition to create eye-catching artwork as part of the campaign to improve awareness of road safety outside schools. The banners were designed to draw particular attention to the dangers of stopping on the zigzag lines next to pedestrian crossings.

It is also aimed at encouraging parents and pupils to consider walking, scooting or cycling to school instead of using cars – to reduce congestion and and to improve air quality, as well as boosting health by encouraging them to Get Moving.

After careful consideration, six designs were chosen from pupils at St Anselm’s Catholic Primary School, Hambrough Primary School and Blair Peach Primary School. The artwork has been used to create road safety banners for the schools.

These winners were presented with a fun safety pack each at individual prize-giving ceremonies where the banners were unveiled and hung prominently outside the schools.

The competition was run by Ealing Council’s road safety team and Berkeley West Thames, which is transforming a brownfield site (Southall Waterside) to provide new homes, entertainment and leisure facilities – as well as new parks and green spaces.

‘The artwork is so creative and colourful’

Ruth Sykes, headteacher at St Anselm’s Primary School, said: “It was great to be part of this important local campaign. A little healthy competition is never bad so we relished the opportunity to engage with other schools in the area. All of the artwork is so creative and colourful – it’s great to see the winning designs up outside the school.”

‘We hope drivers will take note of these banners’

Nicky Batkin, the council’s senior school travel advisor, said: “We’re delighted that so many schools took part and hope that drivers will take note of these banners in the future and heed their messages. Learning about road safety and sustainable travel is vitally important for students. As a council we promote active travel and have a strong belief in journeys made by foot, bike, scooter or public transport.”

Damian Leydon, operations director at Berkeley West Thames, said: “Road safety and awareness is such an important topic for children to learn about so it’s fantastic that so many pupils got involved – although it made the judging extremely hard.”