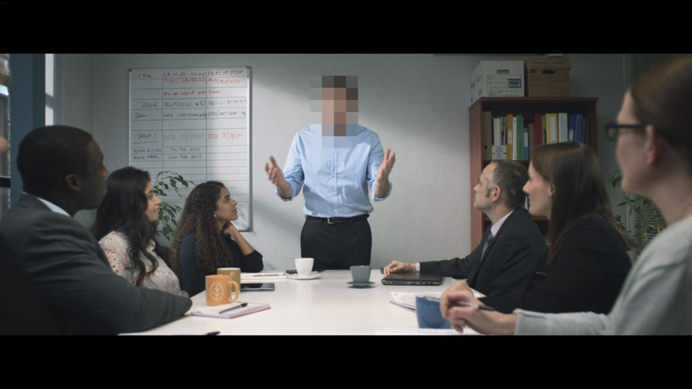 Report it to stop it: Campaign film targets sexual offenders

A hard-hitting Report It To Stop It campaign is hoping to encourage more people to report unwanted sexual behaviour on London’s public transport system – and a short video has been released, which you can view here.

The film shows a successful businessman, presenting to colleagues in an office. His face is pixelated. Voices of women recalling their experiences of various types of unwanted sexual behaviour on public transport are heard. As each woman recounts her experience, the man’s face becomes increasingly visible until he can be seen clearly. At the end of the film the man is apprehended by police, with his colleagues left in shock. It is meant to illustrate how every report helps to build a picture of an offender and are all taken extremely seriously.

Those who experience unwanted sexual behaviour on public transport do not always feel they will be believed or that the offender will be caught. The new campaign film aims to tackle those misconceptions, highlighting how every report matters and is used by police to bring the offender to justice.

You can help to stop it

There was a 36% increase in arrests for unwanted sexual offences on London’s transport network between 2014/15 (406) and 2015/16 (554), and this is partly being attributed to the rise in the number of people prepared to report attacks since a previous Report It To Stop It film was released in 2015 and viewed 13 million times on YouTube.

The new film has been made by a partnership of Transport for London, British Transport Police, Metropolitan Police Service and City of London Police.

As part of the campaign, dedicated action days are being carried out by officers on public transport – including providing advice to the public on how they can report instances of unwanted sexual behaviour.

Detective Inspector Anna Rice from the City of London Police Public Protection Unit said: “Unwanted sexual behaviour is unacceptable in every area of our society, including on public transport.

“If you make a report to us, you will be listened to, taken seriously and treated in a sensitive manner. I know it can be daunting, but by reporting such incidents to police the better chance we have of tracking the perpetrator down and bringing them before the courts.”

How to report it

To report unwanted sexual behaviour on public transport, text 61016 or call police on 101 and give details of what, where and when.