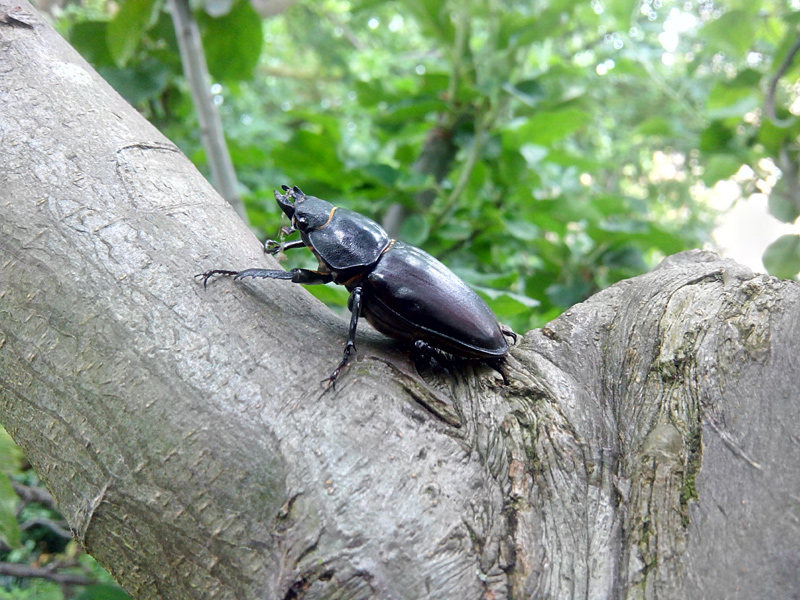 Could you help a familiar woodland creature whose number is in decline? Ealing Council’s park rangers would like you to keep your eyes open for stag beetles.

Stag beetles are commonly found in old oak woodland, but can sometimes be seen in parks, gardens and hedgerows. In Ealing they can be seen around Acton, Ealing Common, Castlebar Hill, and Brent Lodge Park.

This spectacular beetle is the largest terrestrial beetle in the UK and gains its nomenclature from the males’ large ‘antlers’, which they use for wrestling rivals to win the attention of females. They can fly, and can normally be seen on warm, still evenings between May and August.

Sadly, stag beetles are declining in the UK mainly because of woodland clearance, and the common removal of deadwood in farmland, parks and gardens.

Stag beetles are reliant on dead wood, so ‘tidied’ gardens, parks and woodlands have been devastating to their natural habitat. Although they only live for a few weeks as an adult, in the short time that they live above ground they are at risk from humans, cars, cats, magpies and other predators.

But there is plenty you can do to help.

The council’s park rangers are backing a bid by People’s Trust for Endangered Species (PTES) to do a national count of the numbers of stag beetles. They are asking as many people as possible to record any sightings.

If you see one, you can log your sighting on the PTES’s Great Stag Hunt webpage. You will need to record the time, date and location and you will be able to upload a photograph if you have one.

Build a sanctuary in your garden

And, if you have a garden, then you can help them by providing a small log pile or woodchip heap in a corner. They do not eat plants, so they would not harm anything growing in your garden. You can get tips from PTES on how to build the perfect stag beetle sanctuary. It will, in fact, be great for lots of wildlife, wherever you live.