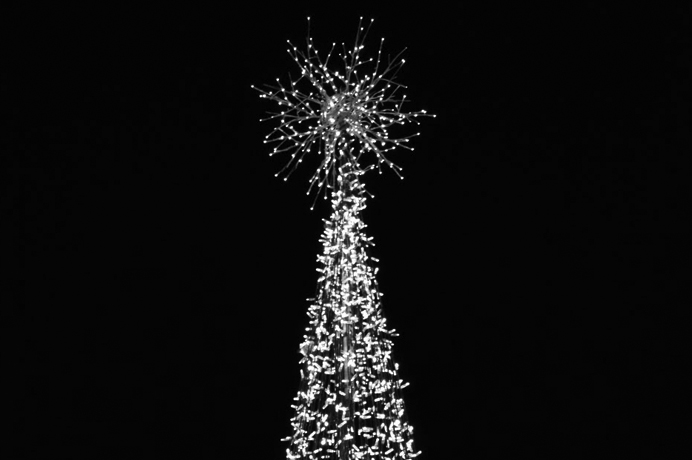 A 24-foot Christmas tree has been unveiled in Southall, accompanied by an evening of carols and traditional fare; and the winners of a school Christmas card competition were also revealed.

Among those attending the event was the mayor of Ealing, Councillor Simon Woodroofe, who turned the tree’s lights on with some help from one of the local school pupils. The tree has been placed in the new Southall Waterside regeneration site by Berkeley Group. It stands in view of Southall Station and has been adorned with bright white lights.

Organised in partnership with Ealing Council, the tree’s unveiling was marked with Christmas carols sung by choirs from Featherstone High School and Hamborough Primary School; while mulled wine and mince pies were provided by Ealing, Hammersmith and West London College, which has a campus in Southall and runs cookery, catering and hospitality classes.

Council leader Julian Bell said: “This is a fantastic initiative and we were delighted to support Southall

Waterside in getting the tree installed. What better way to welcome people arriving in Southall this Christmas season?

“I’m pleased to see that the talent of our schoolchildren will be on display and look forward to seeing the winning entries to the Christmas card competition.”

Damian Leydon, Southall Waterside’s operations director, said: “We’re really excited to have installed such an eye-catching tree in partnership with Ealing Council, helping to give this corner of Southall some season’s cheer.

“The occasion was a great opportunity to showcase the creativity of the students at the local schools, and highlighted the importance of supporting charities like Help for Southall Street Homeless.”

The tree is due to be on display until early January.