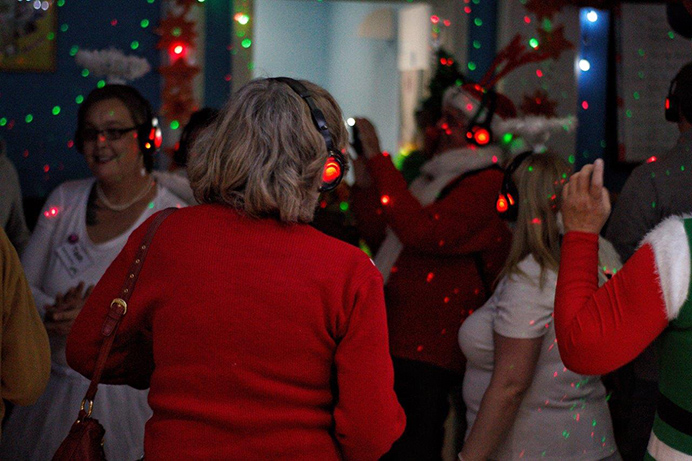 A Christmas ‘silent disco’ at a mental health resource centre was not just a fun way to bring together those who are fighting mental health crises, loneliness or depression at a time of year that can be particularly difficult – it also gave a confidence boost to those service users who got involved in organising it.

For those who do not know about The Solace Centre, it is a hidden gem in West Ealing that helps to combat loneliness and isolation through social inclusion, connecting people with mental ill health in our community. Running for 24 years, it is an out-of-hours service that continues all year round, opening weekday evenings and all afternoon at weekends for around 100 members.

When we visited last year, it was described to EalingNewsExtra as ‘a second home and a safety net’ by those who use it and have come to rely on it. And, since reopening with a new centre, opened by Equinox Care with the support of Ealing Council, Solace has been going from strength to strength and this event showed how much of a community feeling has developed there.

A ‘silent disco’ is just like a normal disco but, instead of the music being pumped out of loud speakers, the songs are transmitted directly to the sets of headphones which each party-goer wears – as you can see in the pictures above.

Guests, who came not just from Ealing but also from as far afield as Luton, Croydon, Catford and Camberwell, were welcomed on entry by the team of Solace service users who had spent six weeks putting the event together. They handed out non-alcoholic cocktails and mulled wine, then there were speeches and a fully laid out buffet, a raffle, a fancy dress competition, cakes and then the silent disco itself – complete with music, lights and dancing.

‘They organised every bit of it’

Catherine Bingham, the senior recovery worker for The Solace Centre – Equinox Care, said: “We all know how one’s self-esteem can be knocked about when experiencing ill mental health. The Solace Centre’s practical day-to-day tips, advice and support reminds individuals of tucked away strengths and abilities – what is possible, through focus and how to relish a challenge and push through the barriers.

“The service users grabbed hold of the Solace Silent Disco initiative with a ‘We can do this’ attitude, formed their team and laid down their commitment to create and lead the best event. They organised every bit of it: From the posters and invitations to catering, headphones and music; along with fund raising within Solace and sourcing community sponsorship.

“Seeing the team’s faces shine with pride, accomplishment and strength of purpose highlights how their hard work really made a difference and, in turn, it gave so much pleasure to others.”

‘Everyone felt part of the excitement and positive vibe’

Service user Natasha was chairperson, and overall team leader. She said she developed new skills in organising and holding meetings, writing agendas and enjoyed encouraging all the team to be fully involved.

She said: “We showed everyone that we are more capable than people might think. We thoroughly enjoyed the process of organising and planning the event.

“In order to put on the event a lot of fundraising was required and our team – Bridie, Kelly, Dympna, Jill, Alison and myself – immediately became hugely active, taking over the centre’s kitchen to prepare and sell cupcakes which then escalated to being sold via Café on the Hill, taken around wards in Ealing Hospital and sold in bulk buys for NHS Trust meetings and at hostels. Also, we set up bingo sessions and a big raffle using donated prizes.

“There was a lot of support from outside of the community which we really appreciated. The evening went better than planned and we would welcome the opportunity of doing it all again.”

Catherine said the process of putting on the event visibly boosted the service user team’s confidence. She said: “The changes in their approach, confidence, pride of ownership and determination blossomed.

“It was a tremendous effort all round and everyone said they felt a part of the excitement and the positive vibe which it spread.”

Since 2016, the council has leased the Solace Centre to Equinox Care, part of the Social Interest Group charity.

The photos were reproduced with the permission of The Solace Centre and were taken by Andrew Mcleay of Ealing Soup Kitchen and Bella Scholey of Equinox Care.