Home > Sharing the message, not the mess 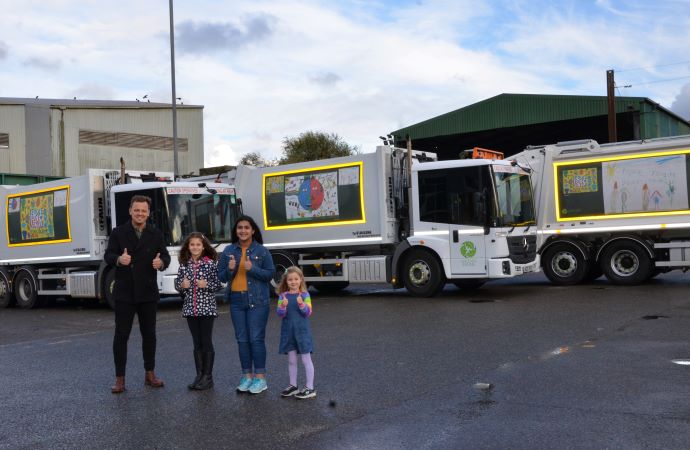 Sharing the message, not the mess

Three budding young artists have seen their work brought to life on a fleet of recycling trucks that will be sharing their message while touring the borough and collecting waste.

The winners of the Greener Ealing art competition visited Greenford Re-use and Recycling centre over half term when their artwork was enlarged and applied to a number of trucks, including a dedicated schools’ recycling truck.

Greener Ealing invited school pupils across the borough to take part in a competition to share a positive environmental message across the borough.  Scores of young people entered and submitted art work which was then judged and the winners identified.

Winner in the 12-18 category, Rida Raza, 12, said: “It was great to see the artwork on the trucks and meet the other winners. It’s exciting to have my artwork being driven around the borough, I hope people stop and take notice and do their bit to help the environment.”

Rida is a pupil at Villiers High School in Southall. She was joined at the recycling centre by fellow winners, Lolita-Phelan Llorca, nine, from Hobbayne Primary School and five-year old Holly.

Ealing Council Leader, councillor Peter Mason, said: “Whilst world leaders are talking about how we deal with the climate emergency in Glasgow, the best people to spread the message that we need to act now to protect our environment are our young people.

“Everyone in the borough can play their part by recycling more and reusing so much of what we chuck out as rubbish. It was great to meet Rida, Lolita and Holly as we unveiled their art, and I hope that their posters as they travel around the borough will help make us all think twice about what we are throwing away.”

Tackling climate action is one of the council’s top three priorities. Its leadership team wants to make the borough a greener and healthier place to live by cutting reducing waste and carbon emissions. It adopted a Climate and Ecological Emergency Strategy earlier this year and it is committed to using its influence to combat the threat of climate crisis.