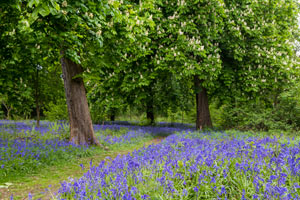 “We’re very proud of our bluebells and we are doing everything we can to protect them, including carrying out conservation work in two of the flowers’ remaining strongholds, Long Wood and Tentelow Wood,” said council park ranger James Morton.

The UK is home to about half the world’s bluebell population, but it remains Britain’s most threatened woodland flower. Two of the best spots in our borough for bluebells have been getting a lot of attention recently.

Ealing Council’s park rangers have been taking action to care for this popular plant, which is often seen as a symbol of the onset of spring and the approach of summer.

The ranger team has been carrying out conservation work in Long Wood (in our picture) and Tentelow Wood and Meadow, both ancient woodlands by Southall, to help increase the number of bluebells there.

“We hope these actions will ensure that we have more bluebells in Ealing than ever for us all to enjoy.”

Sadly, bluebells are in decline, because of the loss of much of their native woodland habitat, and also because the remaining woodland is not always managed in a way that encourages their growth.

The flowers, which tend to bloom in April and May, struggle to grow when a wood becomes too dark and shady, so the council’s rangers have been thinning the densest foliage to allow more light to reach the floor, and planting the seeds.

Another problem faced by native bluebells is that the Spanish bluebell has been imported and widely planted as a garden species, which then cross-pollinates with wild UK bluebells to create a hybrid species.

Long Wood is one of the finest remnants of ancient woodland in the Brent River Park and home to a rich variety of tree species and wildlife, bordered by Windmill Lane and Trumpers Way. Tentelow Wood and Meadow is between Tentelow Lane, Norwood Green and Southall, and is also an ancient bluebell woodland containing a variety of tree species including oak, hornbeam and elm.