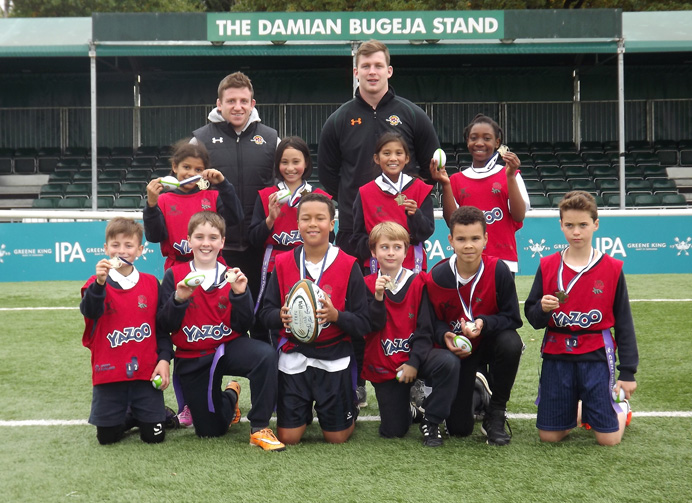 Ealing Trailfinders Rugby Club, in Vallis Way, Ealing, provided the setting for the contest. Its first team competes in the national Championship against some of the country’s best sides.

There were teams from 37 primary schools from across the borough taking part yesterday (Wednesday, 20 October) – with children in years five and six, aged 10 and 11, playing.

Ealing Trailfinders players Arthur Ellis, Willie Ryan, Lewis Thiede and Rhys Crane were on hand to watch the schools in action and to present the prizes at the end of the day.

It was eventually won by St Vincent’s Catholic Primary from West Acton (pictured above with players Arthur Ellis and Willie Ryan). Its team will now go on to represent the borough in the London Schools Games which will take place at Crystal Palace next year.

Stuart Weston from Featherstone School Sports Partnership said: “The facilities at Trailfinders are excellent and meeting the players gives the children a taste of how far they can go in rugby.

“It is days like these that get children into the habit of exercising regularly and enjoying sport.”

What is tag rugby?

Tag rugby is a minimal contact team game. Attacking players attempt to dodge, evade and pass a rugby ball while defenders attempt to prevent them scoring by ‘tagging’ them – pulling a velcro-attached tag from the ball carrier, rather than a full contact tackle.

Generally, each team has seven players allowed on the field at a time. The attacking team has six plays, or ‘tags’, to try to score a try or take the ball down field as close to the line as possible. Tries are worth one point and there are no conversions.