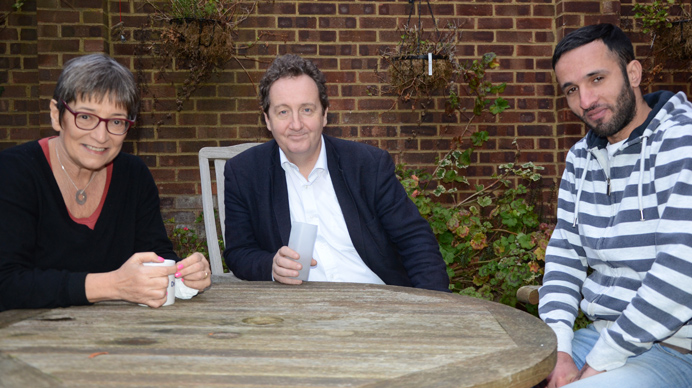 Giving refugees a home from home

Our borough has always been hospitable to refugees – to people fleeing war and persecution – and now is no different. Some residents have even opened up their homes.

Ealing Council was one of a handful of London authorities that stepped in to help take unaccompanied children from the notorious ‘jungle’ camp in Calais before it was shut down towards the end of last year. It provided 11 social care places for these ‘Dubs children’, as they were called. The council also offered four more placements (two residential and two fostered) for other young people. It has also taken in more than a dozen other asylum seeking children in the past year. The council is now working with Liberty to push the government for funding to help care for the refugees.

But you are doing your bit, too, because Ealing residents have also swung into action – with more than a dozen local people hosting destitute refugees and asylum-seekers in their own homes through a new group of volunteers, Refugees At Home.

Refugees At Home, which was co-founded by Acton resident Sara Nathan, matches asylum seekers and refugees with generous hosts who have spare rooms and a generous heart. Sara said: “It is wonderful to be part of something which encourages people from different cultures to meet and help each other. Our hosts are amazing but they gain an enormous amount too from having guests to stay. Guests bring a different perspective on both their home countries and the UK. And some are desperate to share their national dishes with hosts too.”

Guests are usually referred by agencies such as the Red Cross, St Mungo’s and CrisisUK. They come from a variety of troubled countries: Many from Syria and others from Iran, Eritrea, Somalia, Sudan and Afghanistan, among others.

One refugee, who we will call G, is currently living with Sara. He arrived from Syria via Calais last year and is working hard to improve his English so he can find a job as soon as possible – and get his wife out of his war-torn country.

Councillor Bell said: “It was good to meet G and his host Sara and it was clear to me how positive the experience has been for both of them. If you are interested in helping, one way to get involved is to become a foster carer through the council, and another is to become a host with Refugees at Home – which gives these new arrivals the opportunity to integrate, learn English and feel part of the community.

“The council wanted to help its fair share of the so-called Dubs children living in such terrible conditions in Calais – and has also been working to do what it can to help elsewhere too. And it is heart-warming to know Ealing is already welcoming other refugees with open arms.

“It does not surprise me because one of Ealing’s strengths is its diversity; another is its generosity. And you could see the appetite was there to help when the council held a refugee summit last year to discuss how we, as a community, could provide a safe haven for people fleeing war-torn areas. There was standing room only and lots of offers of help.”

Other guests being hosted by members of Refugees at Home include a Syrian anesthetist; an Iranian Christian refugee; a woman from Congo who is in a short-term placement in the borough while her asylum claim is reassessed; and another woman, from Sudan, who has been hosted while she waits to hear about her claim for asylum. A man who worked for the BBC in Baghdad is about to move to Ealing, too.  He hopes to find TV work once his English has improved.

Refugees At Home mostly hosts relatively recent refugees who find that, after their case is allowed, they have 28 days to get out of the asylum-seeker accommodation. Because it is most unusual to get your national insurance number in that time, and therefore impossible to be able to work legally, open a bank account, find somewhere to live or claim any benefits, the Refugee Council estimates that 81% of recent refugees are destitute. Hosting fills the gap until the refugee can find somewhere to live and support themselves. Other guests are asylum-seekers who have nowhere to go, often because their application for refugee status has been rejected – most applications from countries other than Syria are turned down at least once.

Anyone offering to host may feel vulnerable when a stranger moves in, so Refugees At Home checks out every potential guest and take references. It does not host unaccompanied children, nor people with drink or drug problems or serious mental health issues. The hosts are checked too: A professional with home assessment experience visits to discuss the issues involved and to check that everyone in the household is content to host and that there is no intention to exploit the guest. This home visitor also supports the placement once it starts.

And Sara said hosts also have the support of others who are hosting locally. There is a monthly social meeting of the ‘West London Hub’, which gives hosts and guests the opportunity to meet each other and share their experience and local knowledge.