Home > ‘Recycling is a clever thing to do’ 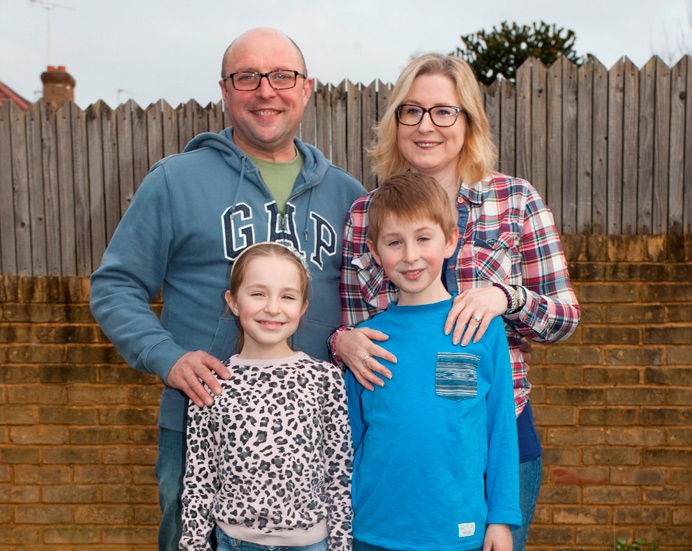 ‘Recycling is a clever thing to do’

When asked who makes recycling happen in their house, Hannah (eight) and Luke (nine) shout: “Mummy! Mummy is the best recycler. We help her put stuff outside, but mummy is the one.”

The Duffy family lives in Hanwell. Ealing News Extra sat down with Hannah and Luke, and their parents Claire and Steve, to find out why they think it is important for everyone to do their bit with recycling.

From June, rubbish and recycling in the borough will be collected differently. Most households will receive two wheelie bins – a black one for rubbish and a blue one for mixed recycling. These will replace the green box and white sack and are designed to encourage people to recycle more and keep streets cleaner.

‘Waste materials have a value’

Claire said: “We’ve always recycled and when the council has brought in new services, we’ve used them straight away. The thing that motivates me is the thought of all that rubbish going in to landfill if it’s not recycled – when it could be used again.”

Steve said: “Claire sorts everything out, but everyone in the family helps. For me, recycling is important because those waste materials have a value and can be used again. For example, plastics can be reprocessed and manufactured for use in industry; things like windows and waste pipes. It’s the same for food waste; it gets turned into electricity and fertiliser. That really appeals to me, because it’s being reused properly.”

The younger Duffys are fully behind their parents’ when it comes to recycling.

“Recycling is a clever thing to do,” said Hannah. “Because you use stuff again. If no one recycled, it would be a waste, because we’d have to make new stuff all the time.”

Luke also liked the idea of using things more than once, and said: “Recycling is good for the environment. If people didn’t recycle, we would just end up with rubbish everywhere. It would be in the water, killing the fish. And you’d have to cut down more trees to get paper and cardboard. If people recycled more, you wouldn’t have to cut down so many trees.”

‘Is the country going to end up as one big landfill?’

Asked what she recycles the most, Claire replied: “Plastics is a big one for me. I get quite frustrated at the amount of plastic that’s used in packaging; it’s unnecessary. If packaging is needed, it should be biodegradable; cardboard, for example. After making just one meal, I seem to have a pile of plastic and packaging on the side and I find that frustrating.

“Recycling is important to me because of where rubbish goes. It’s out of sight, but it’s still there for hundreds of years. Is the country going to end up as one big landfill?”

Steve added: “No one actually knows what effect our actions are going to have a hundred years down the line and by then it’ll be too late to do anything about it. Unfortunately, some people are just lazy and can’t be bothered. It’s a sad fact, but recycling is just too much of an effort for some.”

Claire continued: “Or they’ve got their heads in the sand and they’re apathetic. It is a bit more of an effort to recycle; you have to step outside the door, or find somewhere in the house to store it, so some people just have the bad habit of chucking everything in the rubbish bin. I’ve bought some little sacks that we keep in the kitchen and just put the recycling in there until its worth making the trip outside.”

‘It just takes a few more minutes in the day’

When asked for their views on how non-recyclers could be encouraged to start doing the right thing, Claire replied:  “I would say to people that it’s really easy. It just takes a few more minutes in the day.”

“Yes,” agreed Steve. “I think it just needs to be kept simple for people and then they won’t have an excuse to not do it. I know that not everyone likes the idea of wheelie bins, but I think they’re a great idea. It means that I won’t have to carry all of the different boxes and bags out every week and we won’t have so many black bags ripped open by foxes in our street.”

The last word goes to Hannah: “It’s important for everyone to recycle, even if it’s just a little bit.”

To find out more about how to recycle in Ealing, go to the council’s website or, to receive updates on the new rubbish and recycling collections and wheelie bins, ‘like’ the Facebook page www.facebook.com/ealingrecycling