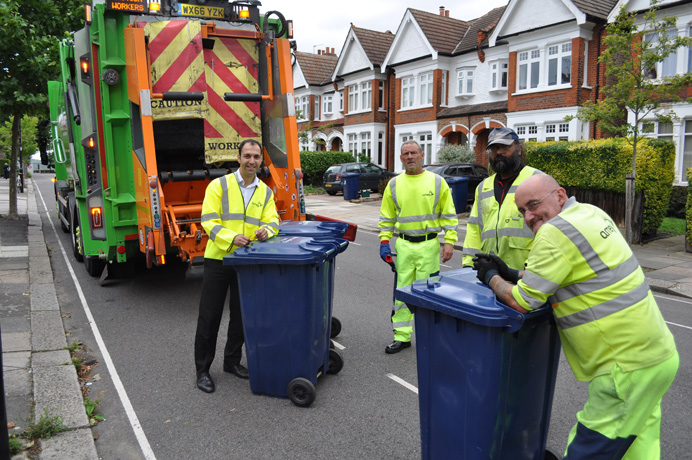 Thanks to your efforts, the borough has already hit its 2018 recycling target. At roughly 140 tonnes in mass, the blue whale is the largest creature on Earth – so imagine how heavy 300 of them put together would be; that is getting towards the weight of all the recycling collected across the borough over the last year.

Thanks to the continued work of residents, this record haul of recycling has been saved from ending up being dumped in landfill. Instead, it is either processed at the council’s material recycling facility (MRF);  or sent for composting; or taken for anaerobic digestion, which is one of the best methods of recycling food waste because it also generates electricity to put into the National Grid.

Earlier this month, Councillor Bassam Mahfouz, the council’s cabinet member for transport, environment and leisure, joined the recycling team on a collection in Ealing to see the improved collection service in action. Since last summer, black rubbish bins have been collected one week and blue recycling bins the next. Food waste is collected every week in the small green bins.

He said: “I’m so proud that Ealing has skyrocketed into the enviable position of second best recycling borough across London. We built on the great work that had got us to 45% by making it simpler to recycle, encouraged more food waste recycling and limited the amount of refuse households could put out. It’s clear it has proved to be a winning formula because we have met our ambitious 50% target a year early. Thank you to everyone who does their bit.

“The new wheelie bin system makes it simpler to recycle than before with all of the contents going to a MRF where it is separated to be recycled and the weekly food waste collection means that less people are throwing away their food as rubbish and instead having it turned into valuable electricity. It also means the days of ripped up black bags with contents strewn across our streets belong to a bygone era and the environmental benefits and financial savings both in terms of collections and disposal have been substantial.

“We’ve seen more than 7,000 tonnes of food waste collected last year alone – a huge difference – one that represents the significant environmental benefits of the new service and it costs us less to send it for valuable recycling rather than paying more and wasting it as rubbish that was decomposing and producing harmful gases.

“It’s an easier and cleaner way of doing things and I’m sure everyone would agree that it is helping local people to embrace recycling.”

This simplified system has been one of the reasons that the borough has been able to significantly improve its recycling rates. In fact there has been a rise of over five percentage points in the last year.

There is, of course, the possibility of improving recycling rates even further, as Councillor Mahfouz was keen to point out. He said: “We want to make sure we keep our rates as high as possible and hopefully boost them even more in the future. I’m really grateful to residents for the continued dedication to recycling and their efforts are clearly reaping rewards.

“We are looking at ways to reduce contamination of recyclable material and ask local people to do the same. You can do this by ensuring that there are no non-recyclable items in your recycling bins, avoiding the need to potentially send whole loads to landfill.”