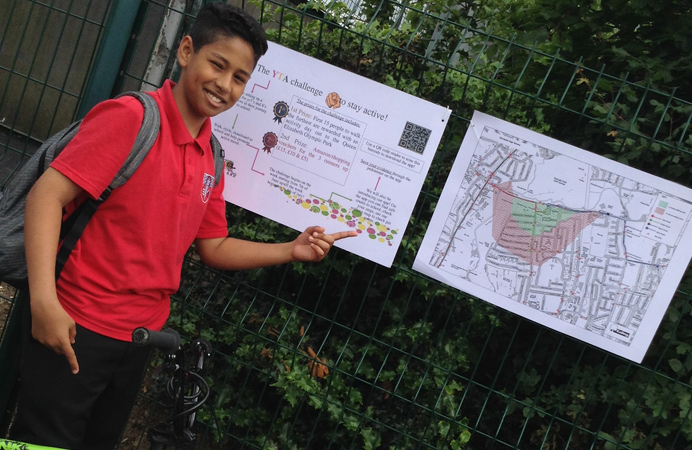 Pupils in Hanwell have developed an ‘app’ for mobile phones that has successfully encouraged others to walk to and from school rather than using cars or buses.

The Brentside High students (from Years 8 and 9) got funding for the project from Transport for London (TfL) after the school became involved in a programme called Youth Travel Ambassadors.

They had to pitch their idea first to TfL experts, alongside other teams of students representing schools from across the capital. Their idea for a campaign based around a specially designed walking app – with a pedometer and route planning features – was deemed to be one of the best.

With help from TfL and Ealing Council, the pupils were then able to make the app a reality. They backed it up by placing posters around the school and by holding assemblies for other pupils – and also by putting up maps to help students find the best route to school.

Since then, the number of pupils walking to Brentside has risen 4% and it is hoped this trend will continue. An element of competition was added by setting up a walking group on the app, allowing students to see each other’s step totals. Prizes during an event in June added extra incentive.

“The students really benefited from hearing these messages from their peers,” said the school’s head of Year 8 Zac Newman. “Once they realised how serious, committed and passionate the Youth Travel Ambassadors were, the students then took it seriously themselves and respected it.”

Brentside got involved in the Youth Travel Ambassadors scheme in 2014.

The same group of pupils, then in Year 7, put together a short video and campaign encouraging building a better relationship between students and bus drivers. TfL used their film in schools across the capital and other cities have used it as well.

Councillor Bassam Mahfouz, the council’s cabinet member for transport, environment and leisure, said: “This scheme has been a great success in engaging young people in the importance of sustainable travel. It has seen Brentside and other local schools take part in projects where the main aim has been trying to introduce more walking or cycling instead of taking the car. It is, of course, a habit worth developing because it is healthier – in terms of individual exercise and also on a wider scale by helping to lower air pollution.

“Since joining the scheme in 2014, Brentside has seen a year-on-year increase in walking of 10% and a corresponding decrease in bus and car use. The pupils’ idea for a walking app was brilliant and it is great to see others have stepped up to the challenge they set.”

Brentside’s app project was shortlisted for ‘Excellence in Walking’ at the national Modeshift awards and was a runner-up at the ceremony in November. See more at www.modeshift.org.uk