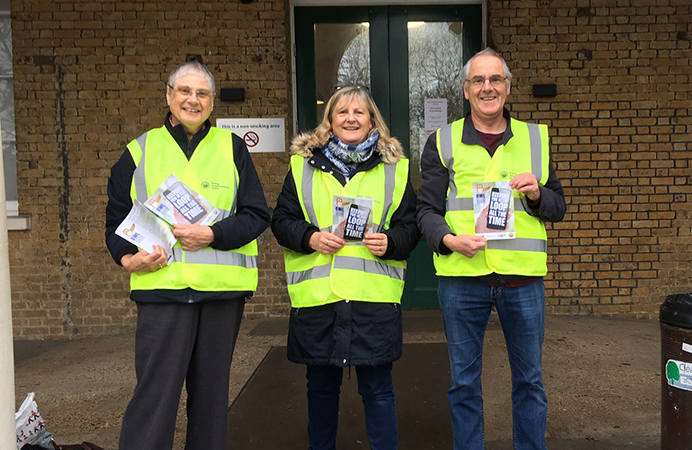 Since it was set up in June, the OWL network has found missing children, stopped scams and helped police gather intelligence. And it wants to get as many people involved as possible to help one another and beat the criminals.

It is an online service that is free for anyone to join, at www.owl.co.uk, and more than 13,000 Ealing residents have already done so.  It is a secure site and compliant with GDPR (general data protection regulation).

OWL provides regular local crime prevention news and advice, and also acts as an alerts service that can provide live updates, warnings and calls for help in an instant – straight to your phone or computer on email. Messages can be sent across the borough – and also to the neighbouring boroughs of Hillingdon and Hounslow – or even just focused in one particular postcode, if it is more appropriate to do so.

Run by a partnership between the police and the community, OWL is overseen by Neighbourhood Watch co-ordinators working closely with police officers. It is funded through the Mayor of London’s office for policing and crime (MOPAC) and is endorsed by Ealing Council.

Getting the word out there

There are already more than 200 local Neighbourhood Watches registered with OWL and the team is growing. In addition to raising awareness, and encouraging vigilance and reporting, the volunteers have also been giving up their time to go out on to the streets, to spread the word for OWL.

Volunteers have been delivering flyers and talking to people about the benefits of signing up to OWL, while the police have been telling residents about it at community events and including it in their own newsletters. Neighbourhood Watch co-ordinators even distributed 500 ‘smartwater’ kits provided by the council, personally explaining how to use the kits and how to register them with the police. Smartwater is a liquid marker you can use on your valuable items around the home – it is only visible under ultraviolet light but leaves a unique ‘DNA’ mark that can be traced to you. Police can use it to identify and return stolen goods – so if Smartwater users display a sticker on their front and rear doors it is a very effective deterrent to criminals.

Furthermore, with the shorter and darker days of winter descending, OWL volunteers have sourced personal alarms and defenders and distributed more than 100 of these to vulnerable residents and students who tend to travel alone, as a means of preventing robberies.

The information sharing through OWL has already had positive results.

It helped police to track down a missing boy in what is believed to be record time. Within two minutes of police receiving the report of the boy going missing, the information went across the local OWL network. Just 11 minutes later, a member of the public registered with OWL spotted the boy and let police know and the little boy was returned to his distressed mother.

The information it has gathered as a group has also helped the police pursue intelligence leads and investigate, while stolen cars have been found and returned to their owners thanks to OWL members’ vigilance. And elderly people have avoided becoming the victims of scams after reading about con artists working in the area and refusing to answer the door to them.

‘We are making history’

Dr Suzanne Tanswell, the OWL community co-ordinator for Ealing, said: “We are already reaping the benefit and the more people who sign up to OWL, the more crime prevention we will get. If residents are informed about crime, they’ll be become involved with vigilance and reporting. There will be more of us working together and helping one another to be aware of any potential issues. Positivity breeds positivity and there is so much enthusiasm and willingness to help.

“Many residents’ associations, community organisations, schools and places of worship in Ealing are adding their weight to the effort to add new registrations to OWL and we are very fortunate in the borough to have so many very well-established bodies, as such, that now want to make a difference and improve local safety and vigilance. The way OWL works means that the area covered by each body can be closely mapped on to the OWL database. By doing so, residents will receive first-hand timely updates from their local police and a potential for neighbourhood watch co-ordinators to join. These organisations have also been given an opportunity to store their members’ list in a safe, secure, and GDPR-compliant system.

“The community can help cut crime. There are more of us than there are criminals. But until now we didn’t have a way to collaborate, communicate and be cohesive.

“We believe the volunteers are putting the time in addition to their care, commitment, and collaboration. We are making history and doing something that hasn’t been done. The three boroughs, under one BCU (basic command unit), are becoming like one entity – not just the police but the community, too. I work very, very closely with my counterparts in Hillingdon and Hounslow.

“The police cannot function without the community and vice versa. We become their eyes and ears on the ground. It is our ward, our borough, our responsibility.

“Informing and warning people, in a timely manner, and raising awareness help people to stay ahead of the criminals; and crime prevention cuts down on police time when they have less resources. It is like a jigsaw with bits missing and the community is taking responsibility for filling the gaps.

“The more of us who are being vigilant and careful and sticking together, the more resilient we all become against crime. OWL is the perfect way to make that happen.”

Inspector Rob Bryan, the police lead for OWL in the Metropolitan Police’s West Area (Ealing, Hillingdon and Hounslow), said: “The online messaging platform that OWL provides is proving to be a game changer in terms of getting information out to local residents and businesses in a quick and effective way. We, the police, are able to utilise it to inform of a local break-in and offer immediate crime prevention advice. It can also be used in real time to let OWL users know about traffic issues or emerging crime trends. Our friends within Neighbourhood Watch can also use the system to send messages to their local watches, so the messages really are tailored to the end user. I would encourage everyone to sign up now at owl.co.uk”

To find out more, and to sign up to OWL for free, visit www.owl.co.uk