Home > No half measures in boosting pupils’ health 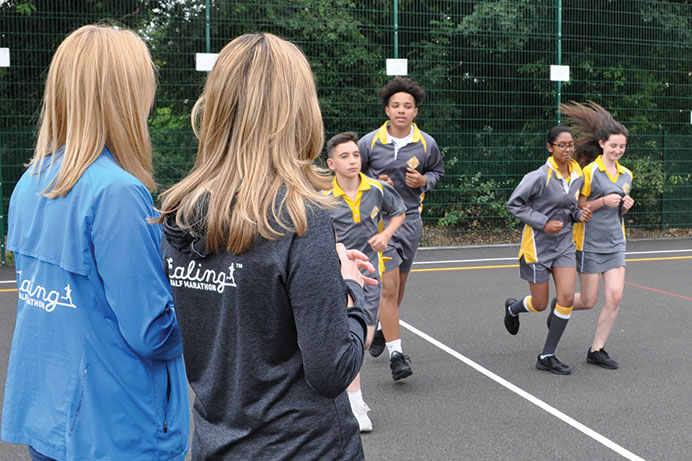 No half measures in boosting pupils’ health

Ealing Half Marathon has become a firm fixture of local life each September; but the team behind the event also goes the extra mile to inspire schoolchildren to stay active and healthy.

Each year, the Ealing Half Marathon Schools Challenge encourages schools to enter their own teams into the half marathon to raise funds for their individual school projects. In return, the Ealing Half team provides training advice and other support.

The winner of the 2018 schools challenge was Ealing Fields High School, which raised more than any other school based on the average funds raised per runner at the 2018 Ealing Half Marathon. In recognition of their efforts, the school was presented with a cheque for £250 to top-up their total – and it was put towards a new minibus. In total, local schools taking part in the 2018 challenge raised more than £28,000.

The Ealing Fields team was comprised of its head of maths, Karl Woodham, plus four parents of pupils at the school.

You can watch a video above with Mr Woodham and some of his pupils – as well as the Ealing Half Marathon team – explaining the benefits of taking part.

‘Means we can play away fixtures’

Mr Woodham said: “We encourage running because it is important for loads of reasons; to keep fit, for enjoyment, for mental health as well.

“The school mini-bus has been delivered because of fundraising and a huge factor in that was taking part in the Ealing Half Marathon. In raising so much sponsorship money from that we also got £250 extra by winning the schools challenge, and it meant we were able to afford the mini-bus this year – which has been beneficial to the kids, and their sports, ever since. They did a boxing tour to Shepherds Bush; the netball team use it all the time, so do the football, cricket, and rugby teams. It means we can play away fixtures and means we can play a whole range of different sports.”

Finding ways to get active

Thousands of pupils have listened to talks by the team at schools around the borough – and many have been inspired to get involved in running, through taking part in junior ‘parkrun’ events, joining the junior section of Ealing Eagles running club, or running in the annual mini mile at the half marathon. Participation in the mini mile has more than tripled since the talks started being held.

A few primary schools have even set up running clubs themselves with the help of the half marathon team.

Sandra Courtney, Ealing Half Marathon race director, said: “At the school presentations we talk about why it is so important to be healthy and active – helping to educate pupils, and parents, on the physical and mental benefits of exercise. Studies have shown it helps with academic attainment and concentration levels, not just the more obvious effects on wellbeing and overall health.

“It is not just about running either. Any type of activity, even walking the dog, can help. And the message really seems to have an impact. It is great seeing how engaged the whole school gets – parents, teachers and pupils.”

The eighth annual Ealing Half Marathon will take place on Sunday, 29 September with an expected 7,000 runners taking on the course; and its children’s ‘mini mile’ will take place the day before. Thousands of people line the route to cheer the runners on, while 700 local volunteers help out.