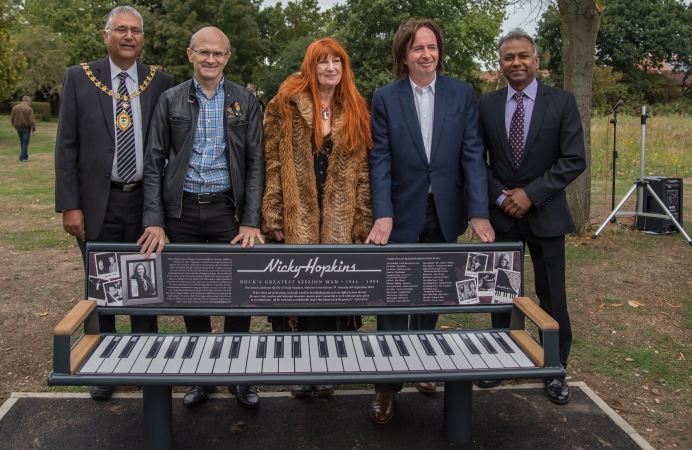 Visitors to Perivale Park may notice an unusual, new feature that is sure to strike a chord with local music lovers: A tribute to a legendary musician that you can sit down to admire.

A memorial for the legendary session keyboard player, Nicky Hopkins (1944-1994), designed to look like a piano, was unveiled last weekend (8 September) by the mayor of Ealing, Councillor Tejinder Dhami; Perivale ward councillor Tariq Mahmood; and Moira Hopkins, wife of the Perivale-born star.

Nicky Hopkins was considered by many to be one of the greatest session rock musicians ever and played alongside some of the most celebrated acts of all time.

Over the course of his long career, which spanned four decades, he collaborated with the Rolling Stones, the Beatles, John Lennon, Paul McCartney, Jeff Beck, Rod Stewart, David Bowie, Ella Fitzgerald, Art Garfunkel, The Kinks and The Who, to name just a few.

He played on famous songs such as Sympathy for the Devil, She’s a Rainbow, Revolution and Jealous Guy.

The installation of the bench was made possible by a crowd-funding campaign organised by music fan John Wood, with the installation supported by Ealing Council. Famous names such as Roger Daltrey, Mick Jagger and Yoko Ono all contributed to the campaign.

John said: “I called Ealing Council to suggest creating a blue plaque for Nicky and the council suggested a park bench that looks like a piano instead.

“I thought that was a fantastic idea and the council kindly said that if I sourced it, they would maintain it. Then, I had to work out how to pay for it. The obvious way forward was crowdfunding and I’d like to give a massive thank you to everyone who pledged.

“In terms of fundraising, we received a total of around £6,500 from 67 pledges, with some donated to the Royal Academy of Music where Nicky himself won a scholarship.”

Councillor Dhami said: “Nicky Hopkins had an extraordinary career and worked with some of the greatest artists of all time. He rightly deserves to be recognised by this memorial here in Perivale Park, close to where he was born.

“I congratulate the hugely successful crowdfunding campaign that has secured this fantastic bench and was delighted to welcome Nicky’s family to the borough to unveil it.”