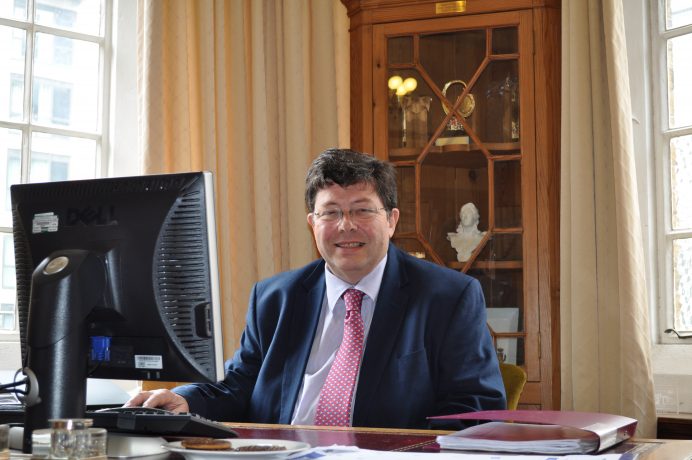 Celebrating the tremendous diversity of the borough and the strong community cohesion that exists will be one of the key aims for Councillor Simon Woodroofe during his year as Mayor of Ealing. He took on the role in May and now has his feet firmly under the table.

“One of the great things about Ealing is the diversity I think we have,” he said.  “It is a very diverse society with lots of different religions and ethnic groups but people tend to get on. They aren’t big divisions and Ealing works because people can be diverse and get on and I think that is something to be really proud of, really.”

As mayor, Councillor Woodroofe undertakes all civic ceremonial duties within the borough and chairs the meetings of the full council.

“Although it is primarily a ceremonial role, it represents the whole community,” said Councillor Woodroofe. “I have been around the borough quite a lot and I am very proud of the borough and all the things it does and to be representative of it is a huge honour.”

During his year as mayor, Councillor Woodroofe will hold events to raise money to support his chosen local charities The Log Cabin and Age UK.

“I think they both have a local and borough-wide dimension to them. Both support areas of vulnerability which I think need to be promoted,” said Councillor Woodroofe.

While fundraising for the Mayor’s charities, he is keen that other causes are not overlooked. He said: “I have just spent a year as deputy mayor and you meet a lot of people in the borough who are just doing terrific voluntary activities, helping people out without getting a huge amount of fame, or recognition and they are not well known and yet there are a large amount of people doing really useful stuff.”

Originally from the Watford area, Councillor Woodroofe first came to Ealing more than 35 years ago attracted by the housing available for BBC staff at the time. While at the BBC he supported the trade union and was on the national executive.

However, in 1993 a career move and an unexpected opportunity brought him into local politics. “I left the BBC in 1993 and wasn’t sure what I was going to do. The local elections were coming up so I put in to be a candidate not expecting to get elected but I did,” he said.

He served as a councillor for the Northfield ward for 12 years until May 2006.  He returned to the council in 2014 as a member for Greenford Green ward.

Councillor Woodroofe is currently a librarian in north London and specialises in the reading development of offenders. “I quite enjoy working in the prison setting,” he said. “I think you are trying to rehabilitate offenders through reading, encouraging them to read as part of the agenda to prevent reoffending.”

Although a proud Ealing resident Councillor Woodroofe remains a Watford Football Club season ticket holder, a passion not shared by his wife and two daughters.

He will have to forego many of the matches this year in order to meet the demands of being mayor. When asked what he hoped to achieve in the year, Councillor Woodroofe said: “I hope I will have spent a year when everybody will see me as a true representative of the groups in the whole borough and Ealing will continue to see itself as one borough –united even though there are lots of differences within it.

“I will do my best as mayor. It is the biggest honour of my life, really.”