Home > Our mayor: Proud to serve 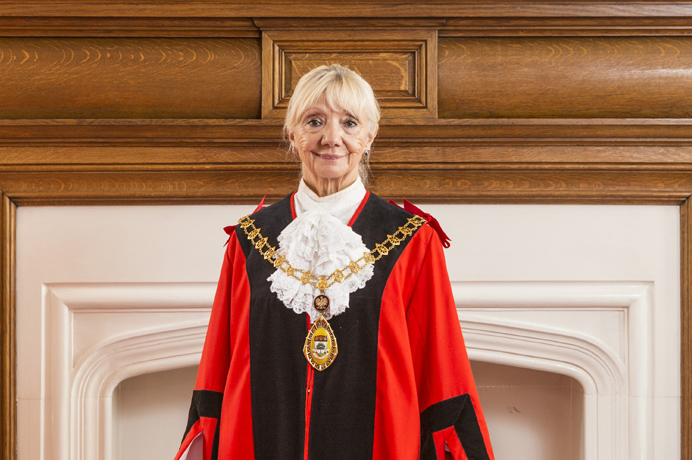 Our mayor: Proud to serve

As a toddler, the borough’s new mayor went out campaigning in a car with a megaphone in the north east of England. How has she ended up as the first citizen of Ealing? We found out.

Councillor Dr Patricia Walker took the ceremonial chains in May and is fully immersed in the civic duties that are incumbent with the role of mayor. This can range from presiding over citizenship ceremonies and granting Freedom of the Borough, to attending a key Remembrance Day service and greeting members of the royal family when visiting the borough. She also chairs meetings of the full council, when all 69 councillors meet in Ealing Town Hall’s chamber.

Originally from the north east, Patricia’s political interests started at an early age through her family’s involvement in local politics and she has followed in the footsteps of her mother Alberta Patricia Wallace, who was the mayor, and alderman, of Gateshead.

Indeed, Patricia has been politically active all her life and fondly recalls going out campaigning as a toddler, and said: “I was active as a child actually, when I was just two years old I remember being in the back of the car and being given the megaphone to shout ‘vote, vote for Albert Esther’, who was my grandfather.”

She has remained a keen activist over the years, managing to incorporate many supportive political roles with her busy professional career specialising in international higher education teaching positions around the UK as well as in Nigeria and Japan. She has published research on the politics of higher education and has appreciated the seamless synergy between her professional and political interests.

But it was not until she decided to settle in the borough, where she had always admired Ealing’s “glorious” town hall as one of its many gems, that her political career gathered momentum. With her family all grown up she was at a stage where she felt she could take a more active role on the council. So when the local Labour Party put out a call for more women to get involved she was ready to respond.

She has now served the borough for more than 10 years and was first elected to the council in 2006 representing North Greenford ward, and appointed to the shadow cabinet with the portfolio for children and young people.

Four years later she contested, and won, the election for Acton Central ward and took the cabinet portfolio for children and families, which she held until 2013. This was followed by the cabinet post for adult services and public health, and then for leisure, sport and libraries. She was deputy mayor of Ealing in 2015 to the then mayor, Councillor Harbhajan Kaur Dheer, who she succeeded as mayor in May this year.

She said: “I am immensely proud and honoured to have taken over this role. We have the privilege of living

in an incredibly diverse and vibrant community in Ealing and, as mayor, I look forward to getting to know even more about the borough and its people. It is the core function of the ceremonial mayor to use the civic duties to raise the profile of the borough, supported as always by my fellow ward councillors with whom I am privileged to work in Acton Central.”

She has enormous respect for the many important civic duties she will perform as mayor, but also wants to use her term to highlight, and showcase, the many wonderful aspects of the borough. This includes the churches, Ealing Abbey, the industrial history of the Acton area and the individuality of the town centres. She is passionate about promoting the borough in the hope that people will come to know and love it as much as she and her family do.

The mayor traditionally nominates charities for which they raise funds during their term in office. Patricia’s chosen charity is Acton Homeless Concern.

She said: “As a mother and grandmother I know that, for most people, a stable home is tantamount to a palace. The work undertaken by Acton Homeless Concern is so important to many people struggling to access the support and services many of us take for granted. This is a wonderful opportunity to raise funds and highlight the vital work they do.”

Married with two children and three grandchildren, Patricia’s mayoral consorts will be her husband Lawrence and her son Christian.