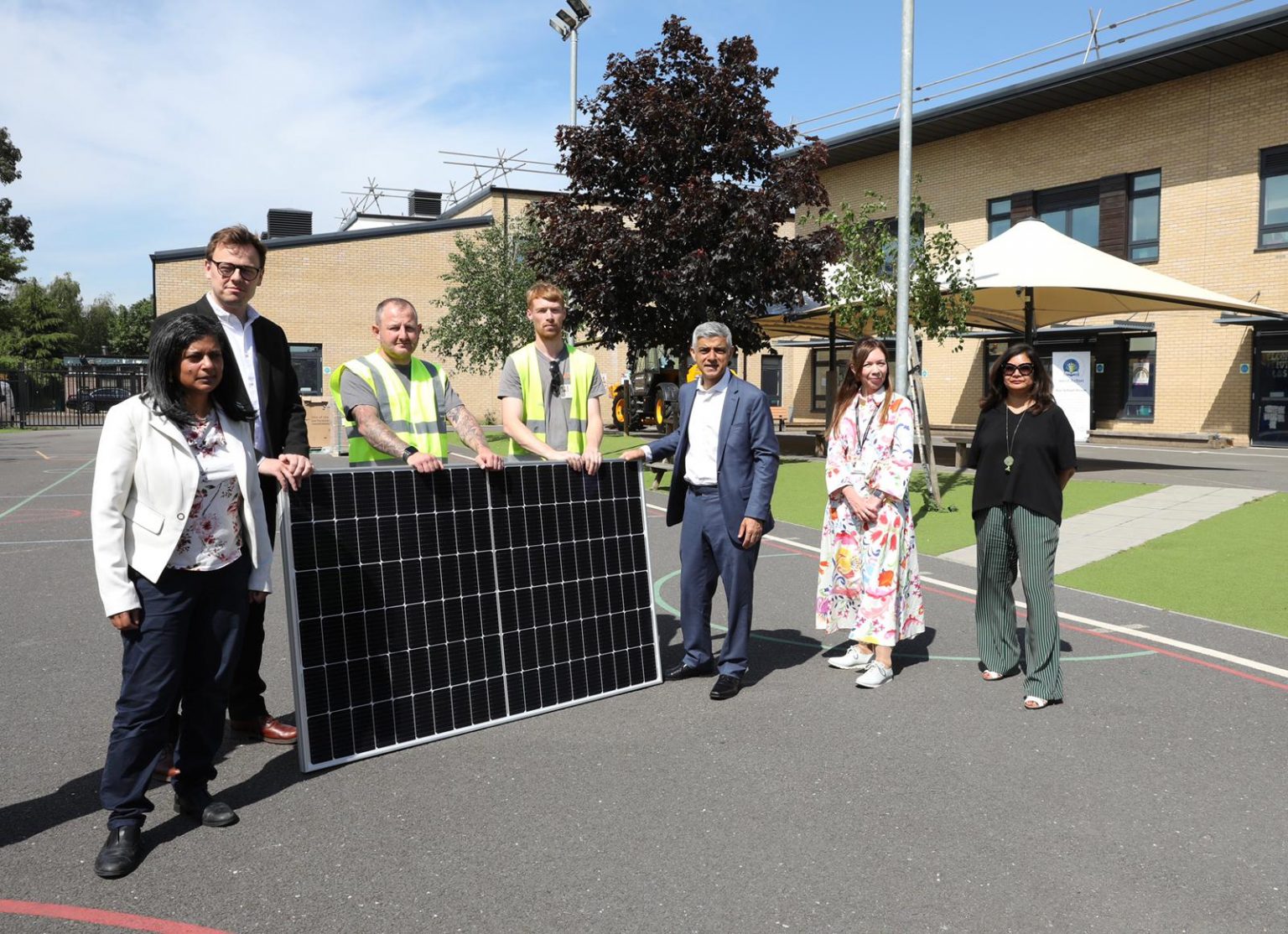 The Mayor of London, Sadiq Khan visited West Acton Primary School in Ealing this week ( Wednesday, 2 June ) where a large solar PV array was being installed.

The installation is widely known as ‘retrofit revolution’ – an initiative to create ultra-low carbon buildings, tackle the climate emergency and create green jobs.

The project, which will supply clean energy to the school, was part funded through the Mayor’s London Community Energy Fund, and is a key part of the borough’s goal of reaching net zero carbon by 2030.

Sixteen schools in Ealing and two children’s centres have signed up to have solar panels and other energy efficiency work done with support and expertise from City Hall.

What is the ‘Retrofit revolution’?

The installation supplies clean energy to the school and will support the Mayor’s initiative to create ultra-low carbon buildings, tackle the climate emergency and create green jobs.

The Mayor of London, Sadiq Khan, who visited the school said:

“Creating jobs and tackling the climate emergency are two of my priorities for London and that’s why I am delighted London is leading the way on a retrofit revolution.

“This transformative approach to retrofit will directly help those living in ageing, energy-inefficient homes, and schools and could play a vital role cutting energy bills and tackling fuel poverty. It will also support Londoners with the skills they need for jobs in the green economy, rebuilding our city post-COVID so that it’s cleaner, greener and fairer.”

Improving the carbon performance of our buildings is another crucial step towards our goal of tackling the climate emergency and reaching net carbon zero by 2030, and we’re excited to be launching this project with City Hall.

“Greening our borough by tackling the climate crisis, cleaning our air and ensuring the borough we build is sustainable is a key priority for our council. The 16 installations in local schools and children’s centres are performing well, saving an incredible 150 tonnes of carbon dioxide emissions each year compared to electricity generation with gas. They also have an expected lifetime carbon dioxide saving of around 5,000 tonnes.

“Schools and Children’s Centres aren’t just contributing to the fight against climate change by signing up to this scheme- together they are saving about £15,000 each year on their electricity bills. This is exactly the type of project we want to promote in Ealing and we are looking forward to working on more ambitious schemes like this.”

“Since 2015, the Ealing Transition / School’s Energy Cooperative’s solar PV project has installed systems on 14 schools and two Children’s Centres in Ealing. The systems are provided at no cost to the schools or Children’s Centres, which simply purchase the solar generated electricity that they use – at a lower price than their price for grid electricity.

“These installations could not have happened without the active support from Ealing Council, and from the Greater London Authority’s London Community Energy Fund. We are delighted to have had the support of these two organisations.

“As a school we are delighted to be part of a project that generates clean energy from solar panels. For our children to know that the global climate crisis is close to home and that in the middle of a busy city like London, we are helping the environment gives them pride and meaning to play their part.

“It helps us create not only knowledge but curiosity and passion about the natural environment in our children which can only be a good thing for all our futures.”

Read more about the Council’s Climate and Ecological Emergency strategy