Home > Meet Mayor Gulaid – a man of science and medicine 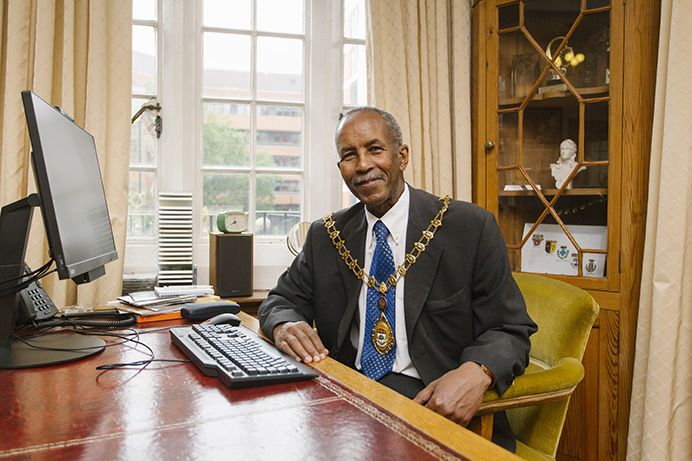 Meet Mayor Gulaid – a man of science and medicine

In May, Councillor Dr Abdullah Gulaid was formally elected as the new mayor of Ealing and has been enjoying the ‘very rewarding and challenging’ role.

As mayor, Councillor Gulaid undertakes all civic ceremonial duties within the borough. This will include attendance at key Remembrance Day services and greeting any members of the royal family visiting Ealing. He was a key figure at the Armed Forces Day event in Ealing in June (you can see some photos from this event in our gallery).

He is being assisted in his duties by Councillor Munir Ahmed, who was appointed deputy mayor.

From early skills to medical research

Councillor Gulaid came to the UK in 1969, when his early science skills were recognised by the government, which granted him a scholarship to complete A-levels and a degree course.

Unsurprisingly, Councillor Gulaid’s professional career has centred on medical advances and he has worked across the world – Europe, USA and Japan – on clinical trials. He was the co-founder of the Sickle Cell Anaemia Research Foundation and a trustee for the Black African and Caribbean Mental Health Consortium and Richard Darlington Foundation. So, no surprise that he was nominated and awarded to be a Fellow of the Royal Society of Chemistry and Chartered Chemist in 2001.

‘So many opportunities to make a positive impact’

He has been a Labour councillor for Acton Central ward since 2010 and a member of several committees including planning, health and adult social services and corporate parent and has been the Ealing mental health champion since 2017. He was also a governor at local schools Southfield Primary, West Acton Primary, Derwentwater Primary and Acton High.

Councillor Gulaid said: “Being the mayor means having a duty to do everything you can for local communities in Ealing. I am originally from Somalia and came to the UK in 1969 and even in that time I was interested in politics so it’s obviously an honour to be mayor. There are so many opportunities to make a positive impact.

“It is very rewarding and challenging to be mayor. It is an important link between the council and the community hopefully I can strengthen that wherever possible. You listen local people and hope you can work to help them wherever you can.”

Councillor Gulaid has chosen Acton-based Descendants as his charity for the year. Since it was set up in 1993 it has worked to create an environment to help young people (primarily but not exclusively) of African and Caribbean descent to learn together, build their confidence and thrive.

Descendants celebrated its 25th year last year – and this milestone was followed this year by the honour of receiving a 2019 Queens Award for Voluntary Service – which is the highest award given to volunteer groups across the UK to recognise exceptional service within their communities.

Find out more at www.descendants.org.uk

Councillor Gulaid said: “Part of my work over the year involves helping to promote the work of my chosen charity Descendants, which helps support young people in west London. I think it’s vital we ensure that young people have the care and support they need in what can be a challenging age for anyone.”