Home > Join the march, sign the petition; save our hospitals 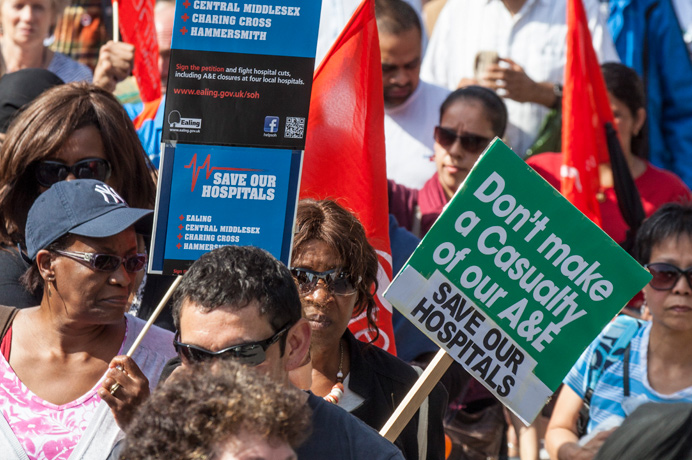 Join the march, sign the petition; save our hospitals

Residents are being called on to join a public march on 30 September and sign a petition to protest against proposed changes to local hospitals that have been described by the leader of Ealing Council as a genuine risk to health.

The NHS has closed the maternity unit and children’s ward at Ealing Hospital and there are now plans to close
its ‘blue-light’ accident and emergency (A&E) unit – and to reduce the number of in-patient beds at the hospital from 288 to just 50, a cut of more than 80%.

Meanwhile Charing Cross Hospital, in neighbouring Hammersmith and Fulham, would lose 336 of its 360 inpatient beds, a 93% cut; and its A&E unit would also close down. The two nearest alternative A&E units – at Hammersmith and Central Middlesex hospitals – have both already closed.

Two marches will take place: One from Acton Park in the east of the borough from 11.30am and the other from
Southall Park in the west from 11am. The marches will then meet in the middle at Ealing Common by 1pm for the rally, with speeches.

Sign a petition against the changes at sohpetition.co.uk or visit www.ealing.gov.uk/soh for more details.

‘Hospital will be unrecognisable’

Council leader Julian Bell said: “Our borough has already seen significant reductions in local hospital services by the NHS, including closing the maternity unit and the children’s ward at Ealing Hospital – and there are plans to do the same to its A&E. With potentially no surgery, no critical care, no acute beds, no emergency ‘blue-light’ ambulances, no maternity unit and no children’s ward, it is unlikely that any resident would be able to recognise what was left as a hospital.

“I believe these changes pose a genuine risk to the health, and lives, of the people of north-west London.”

‘Show the strength of feeling’

Councillor Hitesh Tailor, cabinet member for health and adult services, said: “It’s important for our residents
and the wider community we continue with our opposition to the loss of vital health services. We have written to the Secretary of State for Health, urging him to reject these changes and the rally on 30 September is an opportunity for the community to show the strength of feeling there is in Ealing.”

The NHS proposals are part of its Shaping a Healthier Future programme. Among its stated aims are to provide: Access to care around the clock; easy booking of GP appointments; more specialist doctors; mental health being considered at the same time as physical health; and, more joined-up care when you need it from multiple sources.