Home > London’s headteacher of the year is from local school 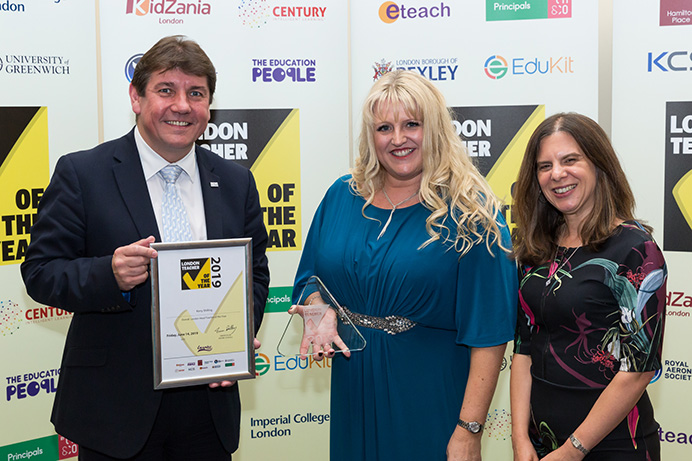 London’s headteacher of the year is from local school

The London Teacher of the Year Awards 2019 were presented at an event organised by educational charity Inspire Schools.

It was held at the Royal Aeronautical Society in Mayfair and the judging organisations included Imperial College London, the University of Greenwich and the London Chamber of Commerce and Industry.

Selborne was judged to be ‘Outstanding’ in its most recent Ofsted inspection – a rating only given to around 18% of primary schools nationally. The school has also been recognised by London Mayor Sadiq Khan’s School for Success scheme, which aims to improve education across the city and recognise excellence.

Mrs Shilling has been headteacher at the school in Conway Crescent, Perivale, since 2015. She is pictured above (centre) receiving her award.

She said: “I am so honoured to win this award. I have the opportunity to work alongside passionate and committed professionals who make such a difference to children’s lives. Thank you to the governors for their continuous support “

Prash Mehta, who is chair governor at the school, said: “To be recognised as the best headteacher in London is a fantastic and well-deserved achievement for Mrs Shilling. She is an outstanding leader at Selborne and, with the support of teachers, staff and governors over the last few years, has turned the school around to be Ofsted graded as ‘outstanding’ and has had a hugely positive impact on the local community.”

Maria Adan, co-chair of Selborne’s parent-teacher association added; “We are all so very proud that she has been given this award. This award recognises the tireless efforts that our amazing headteacher puts in to keeping our school ‘outstanding’.”

Also triumphing at the awards evening was Pholoso Masenya a teacher at Christ the Saviour C of E Primary School in Ealing, who won the Ealing and Hillingdon raising-aspiration award.

Inspire Schools chief executive Simon Dolby said: “All of the winners thoroughly deserved their awards. These teachers and support staff really do amazing work expanding the horizons and opportunities of young people across the capital, and the whole of society owes them a huge debt.”