Home > Lego suffragette gets the vote from museum 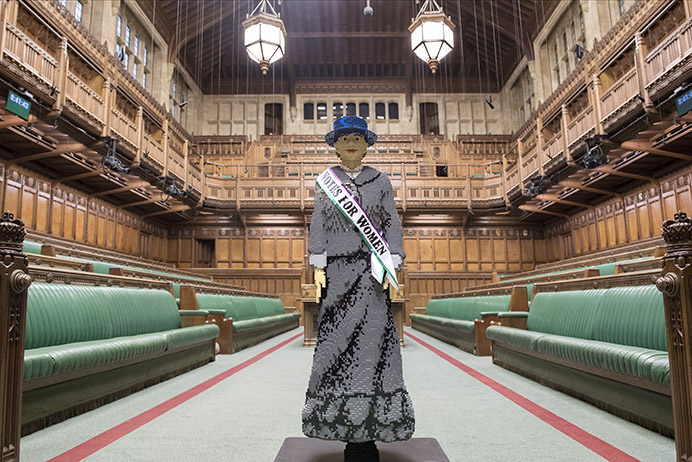 Lego suffragette gets the vote from museum

To mark International Women’s Day on Sunday (8 March), a suffragette with a difference is making an appearance at Gunnersbury Park Museum.

The statue was built in 2018 for the Houses of Parliament’s education and engagement team, taking three Lego employees 171 hours to build. She was created to help tell the story of women’s suffrage 100 years after the first woman gained the right to vote in parliament, in 1918. You can read more about its impact locally in our own history article on a century of suffrage.

A decade later, in 1928, the Representation of the People (Equal Franchise) Act gave equal voting right to all women and men regardless of their position in society. So, between now and the centenary of the act in 2028, Hope will be touring across the UK.

The picture above is of Hope at the Houses of Parliament (© Parliamentary Archives).

Accompanying Hope at Gunnersbury will be a temporary display on local suffragette Marion Wallace-Dunlop, who was the first suffragette to go on hunger strike in 1909 and lived at 16 Montpellier Road, Ealing.

Wallace-Dunlop will also feature as part of a talk being given tomorrow (Saturday, 7 March) at Gunnersbury by author Elizabeth Crawford. She will be discussing the lives and work of the suffrage artists. Through a variety of media, including banners, posters, china and jewellery, these artists created a highly visual political campaign in support of a woman’s right to vote. Find out more and book a ticket online at www.visitgunnersbury.org

On Local History Day, on Saturday, 28 March, Gunnersbury will be holding talks all day between 1Oam-4pm. For £20 you can buy a day ticket to attend up to three talks or tours during the day. You can book them on the Gunnersbury website.

Events include: A talk about Hanwell Asylum and the Victorian medical practises occurring there; a museum tour by Gunnersbury’s senior curator Julia Tubman; a talk by Gunnersbury archivist Kathryn Rooke that will explore the wealth of local history resources in its possession; a talk by borough archivist Dr Jonathan Oates on the story of the unsolved killing of PC Kelly in 1920 in Gunnersbury Lane; and a talk by David Knights of Acton History Group will discuss a factory in Acton that was dedicated to making memorial scrolls and plaques for the next of kin of soldiers who died in the First World War.

As ever, a wide range of other activities will be taking place at Gunnersbury this month – visit its website for more details.