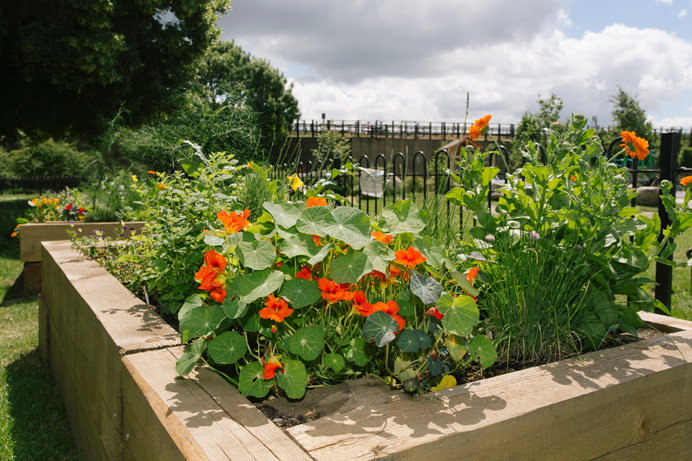 If you go down to a playground in Acton Green today you might be in for a surprise because, right next to it, there is a small, living kitchen garden that has been growing fragrant, perennial herbs and fruit and edible flowers. Even national judges inspecting parks were impressed.

Acton Green Community Herb Garden was the idea of resident and parent Anna Marie Yassin. It was funded by the council’s Southfields ward forum and built by volunteers.

It comes in the form of two raised beds, and has been built on the north-east boundary of the children’s playground on Acton Green. It only needs low levels of maintenance and adds to the play area by giving children an opportunity to learn about
food growing – and encouraging residents to come together.

Anna said: “Already there is a growing community of locals who maintain the beds who had not known each other previously. Bees and butterflies are spotted regularly, as are parents introducing children to edible flowers.”

Prior to moving to Chiswick, Anna lived in Hackney and was a plot holder at an award-winning, resident-led community garden project called Growing Kitchen which transformed a disused site into a shared edible garden.

“It was a wonderful example of community integration,” said Anna. “It also educated people about environmental sustainability, food growing and healthy eating, all issues that I am passionate about. The herb garden is a scaled down version. It is a small part of a larger movement promoting urban food growing.”

Apart from the funding received from the ward forum, the project was also supported and advised by local groups: Acton Green Residents’ Association, Abundance London and Ealing Transition. And social enterprise Cultivate London built the raised beds – providing landscape gardener Auberon and an apprentice to do the work. Cultivate London helps with training opportunities and jobs for unemployed young people aged 16-24 in practical horticulture and landscaping.

Acton Green Common received a Green Flag for excellence last year and the judges visited again recently and decided the common should keep the flag this year. They said they were impressed by the presence of the garden.

Council park ranger Pat Robinson, who helped with the garden’s logistics, said: “The Green Flag judges both liked the concept of freely available edible herbs, and the fact that it was a volunteer-managed project, but had the backing of the council’s parks service.

“I think the project shows that you don’t need much space to grow plants that can improve the flavour of many different meals.”

The beds are now maintained by volunteers. If you would like to get involved you can email actongreenherbs@gmail.comor get in touch via the Facebook page www.facebook.com/pg/actongreenherbs

Look out for your local ward forum meeting and influence what happens in your neighbourhood. Visit
www.ealing.gov.uk/wardforums for more information