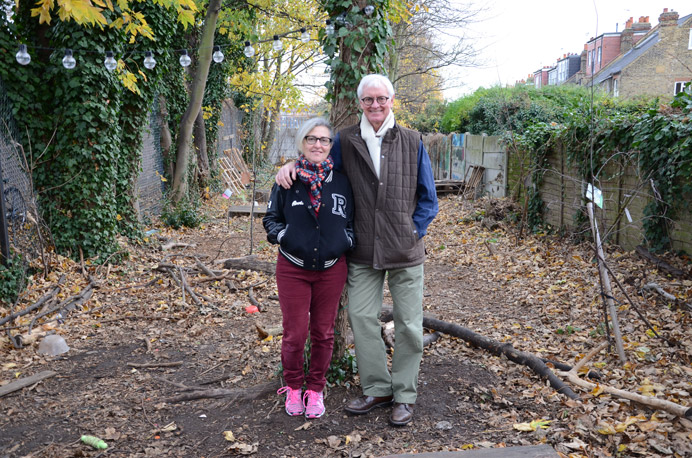 The hut and forest school at the heart of a community

A recent celebration at a scout hut may have gone unnoticed by people outside of one part of Acton, but it marked a significant milestone in a volunteer-led, council-supported project that involved the whole community and could inspire others to transform a corner of their own neighbourhoods.

Acton 14th Scout Hut in Rugby Road has been renovated to become a genuine hive of activity for all, while an outdoor ‘forest school’ and activity area has been created for local children on a disused piece of land alongside.

These were officially opened in November with a ceremony attended by representatives of the many organisations that helped the scouts and volunteer residents transform the site. This included Thames Water, Tideway and Balfour Beatty and Ealing Council, as well as a regional scout leader and Southfield Park Triangle Residents’ Association (SPTRA).

Where it all began

The story began years ago when 14th Acton Scouts group was gifted some land next to its hut by a factory estate that stands alongside the site. It was originally part of the old North and South West railway. Scout master Glen Young was determined that this land should be put to use in a way that would benefit the whole community.

Frustratingly, two dark clouds hung obstinately on this imagined horizon: Firstly, the strip of gifted land was unkempt, overgrown and beset by anti-social behaviour including fly-tipping; and, secondly, Glen was unsure how to overcome this physical barrier and make something practicably useful out of the space.

So, he spoke to members of SPTRA. And this is where Don and Suzanne Tanswell (pictured above in the forest school area) stepped forward with a seemingly inexhaustible supply of ideas and hard graft. Don began to secure funding and foster interest in a transformation project. First up was a successful bid for money from the council’s Southfield ward forum in September 2014. What followed was a flurry of activity.

“The money from the ward forum was the start of it all,” said Don. “This initial support from the council spurred new energy and there have since been three years of continual improvement. The end result is a facility for all the community. Success breeds success – each stage has led to another.

“It really was a bit of a mess, but we are so pleased with how things have progressed; and we aren’t finished yet.”

Suzanne added: “We believe in the community, and it was down to local people to provide thought leadership, accountability, do the legwork and be persistent to get things done.”

Seeing the fruits of their labour

So what did the project involve? Well, the short version of three years of effort is as follows.

Once that initial £9,400 was provided by the council’s Southfield ward forum, in record time, work got under way. Thames Water later donated a further £10,000 after being approached by Don – the company’s storm tanks site is opposite, where the new Tideway tunnel is now being built. Later on still, the scouts contributed funding as well, together with some further money from the ward forum.

Throughout this search for money, of course, hands were rarely idle. First of all, the neglected strip of land was cleared and some tree surgery was done, then some of the ugly wire fencing was replaced and new storage sheds for the local Montessori school and the scouts were bought.

A special event with more than 30 volunteers carried on shaping and filling the new forest school area, with 25 new fruit trees being planted. These had been donated by Wyevale’s Syon Park Garden Centre, after Don approached it for help.

Next to receive attention was the scout hut itself, to bring it into the 21st Century and make it fit for a wide range of uses. It led to an upgrade of the electrics, with new lighting and control panels; the interior of the building was given a revamp, with new décor; and a new kitchen, which was partially donated by the nearby Howden’s Joinery, was installed. A new section of secure perimeter fencing has also recently been added by Littlewood Fencing as part of a community contribution from Tideway and Balfour Beatty.

Don said: “Although it was private land given to the scouts, Glen insisted it should be used for the whole of the community and it is now able to be used by the Ark Montessori and the local primary after-school club, the scouts, local groups and parents for parties, and is also used by the residents’ association for our meetings.”

There are plans to carry on the work, with new matting for a play area behind the hut, to make it even safer for the children – but that is not all. “We have so many ideas to improve things even further,” said Don. “It won’t stop here.”

He added that he has been asked to give talks at other ward forum meetings to show how such projects can get off the ground.

“It’s important for people who are looking to attract funding to know that there really is a ‘right type of support’ out there,” he said. “And it is the type of support that can help you look ahead to the future not just add something to the present.”