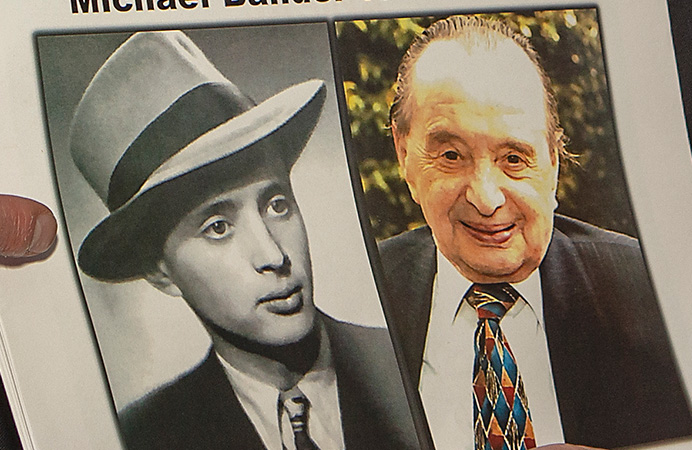 This week, school pupils from the borough took part in a special programme of events hosted by local synagogues to mark Holocaust Memorial Day.

The students, from years 9 to 13, participated in educational workshops and also had the rare opportunity to listen to personal experiences of survivors of the Nazi’s holocaust that saw millions of civilians being murdered, before and during the Second World War.

The speakers then gave their personal accounts. All the students were very attentive and moved by what the speakers told them.

Holocaust survivors Marianne and Peter Summerfield were the guests at Ealing United Synagogue on Tuesday (5 February); and they talked to students from Villiers High (from Southall). The Summerfields shared their stories with local pupils last year too and you can read more about that here.

They told of how their parents experienced Nazi and anti-Jewish victimisation. Peter was born in Germany and he saw the burning of homes and businesses the day after Kristallnacht (9 November 1938). His parents managed to leave Germany by train and ship to London in August 1939, just a week before the Second World War broke out.  Peter told of how they survived in London on borrowed money and charity. He subsequntly managed to carve out a very successful life – he did national service, including active service in Egypt, went to Oxford University and trained as a solicitor.  He and Marianne have five children between them and 12 grandchildren.

Did not dare ask about his siblings

On Thursday (7 February), Martin Bandel, the son of Michael Bandel, shared his father’s story with Brentside High pupils (from Hanwell).

Michael was 11 when war broke out in 1938. When he was 14 his parents were arrested and sent to separate prisons but they were released after a few months and the family was reunited. Jews were not allowed to ride bikes, buy meat, eggs or milk, or use public transport. These are part of the nearly 2,000 Nuremburg Race Laws that were introduced in Germany in 1935. Nor were they allowed to go to school. By 1943, Jews had to wear a yellow star sown on to their clothes. In 1944, Michael and his father were taken to Auschwitz and five days later they were sent to Mauthausen. Michael’s father did not survive. Some time later, many people arrived in Prague and it was there that he finally saw his mother and one of his sisters again. He did not dare ask what happened to his other siblings. Michael arrived in London in 1946 to rebuild his life.  His mother and sister went to Israel to start new lives there.

At the end of each afternoon, the speakers were invited to light a memorial candle in memory of the six million Jews who died in the Nazi’s holocaust, in honour of the speaker and his family, and as a light of hope for the future.

As we reported last month, Ealing Council held its annual service to mark Holocaust Memorial Day at William Perkin High School. The mayor of Ealing, Councillor Tejinder Singh Dhami, was joined at the school in Greenford by Councillor Peter Mason, cabinet member for housing, planning and transformation; the Reverend Dean Ayres, associate rector of Acton; along with the school’s pupils and local dignitaries.